New York to London and Back - The Medium of Contingency 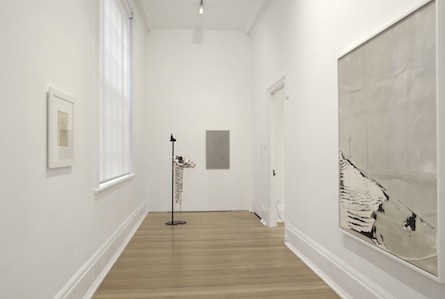 Exhibition view
NEW YORK TO LONDON AND BACK - THE MEDIUM OF CONTINGENCY
18 January - 19 February, 2011

NEW YORK TO LONDON AND BACK – The Medium of Contingency January 18 – March 5, 2011 The Directors of Thomas Dane are pleased to present a collaboration with New York gallerist Miguel Abreu and with Robin Mackay and Tobias Huber of Urbanomic. The latter is a unique organisation based in the UK, which aims to address crucial issues in contemporary philosophy and science in relation to contemporary art practice. The project at Thomas Dane Gallery takes the form of an exhibition, a public discussion, a film screening and a publication, over the course of a four-week period. Exhibition Private View: Tuesday, 18 January, 6-8pm Artists in the exhibition include Kristen Alvanson, Hans Bellmer, Liz Deschenes, Thomas Eggerer, Rachel Harrison, Gareth James, Alison Knowles, Sam Lewitt, Scott Lyall, R. H. Quaytman, Eileen Quinlan, Raha Raissnia, Jimmy Raskin, Blake Rayne, Pamela Rosenkranz, Pieter Schoolwerth, Amy Sillman, and Cheyney Thompson. In association with Sutton Lane. Discussion: The Medium of Contingency: Wednesday, January 19, 6.30- 8 pm The notion of ‘contingency’ has become crucial both in contemporary philosophy, and, as the artists in this show suggest, in contemporary art. If thought and practice are to abandon the idealism of autonomy and acknowledge the networks they are a part of, the question becomes one of developing a thought and a practice that opens to contingency. The discussion will explore how works of art write contingency into the present; are in turn written by the contingency of their materials; and how these exchanges interact with the market. The discussion will include co-organizer Robin Mackay, editor of the transdisciplinary journal Collapse, Elie Ayache, former options trader and author of The Blank Swan and Matthew Poole, freelance curator, writer, and Director of The Centre for Curatorial Studies at The University of Essex and New York based artist, Scott Lyall. Reza Negarestani, Iranian philiosopher and author of Cyclonopedia: Complicity with Anonymous Materials, will join via live link form Malaysia. Miguel Abreu will moderate the discussion. A video of the discussion is available online here. (Doors open at 6pm. No tickets required - limited seating) Film Screening: Dalla nube alla resistenza (From the Cloud to the Resistance), 1978 (105 mins), by Jean-Marie Straub & Danièle Huillet: Friday, January 21, 6.30-9pm The films of Jean-Marie Straub and Danièle Huillet constitute a pivot around which the program at Miguel Abreu Gallery unfolds. Abreu screens one or several of the films of Straub & Huillet, from time to time, on their own or in conjunction with other artists, as a way to manifest his allegiance to a certain ethic of the image these filmmakers have so potently developed over the last half-century. Precisely because Straub and Huillet do not consider themselves artists – this word signifies to them creation out of nothing, drawing out of the void – but craftsmen servicing pre-existing texts and other materials from history, there is an attitude here, a palpable spirit of rigorous apprehension, exchange and translation that could be shared beneficially with the other artists with whom Miguel Abreu works. (Doors open at 6pm. No tickets required - limited seating) Publication: The Medium of Contingency, edited by Robin Mackay Friday 11 February Published by Ridinghouse and Urbanomic The publication will include an edited transcript of the discussion held on 19th January, along with short interventions by some of the artists taking part in the exhibition.
www.thomasdane.com