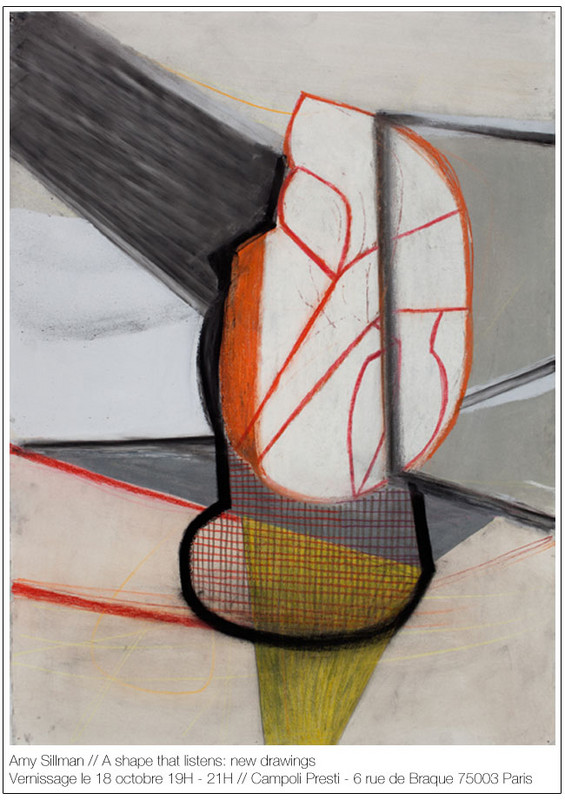 "Deep inside his pictures, a shape stands up and listens"
Jayne Anne Phillips, Lark and Termite, Alfred A. Knopf, 2009

Campoli Presti is pleased to announce A Shape that Listens: new drawings, Amy Sillman’s first solo exhibition at the gallery. The show features twenty-two new drawings along with one painting. Both mediums follow an interrelated methodology in which drawing allows to open an area of structural space in painting without following a set order.

Sillman’s drawings are open-ended investigations that use the straightforward materiality of form: shape, line, silhouette, cut, stain, color, tone, fragment. While this practice offers the pleasures of the formal language, she works at the same time with a psychological procedure of constant contradiction, building, destroying and rebuilding again in a restless ongoing course of action. She deploys an anxiously active set of moves against a simple immediate mark or form—something easy against something hard, something unedited and impulsive against something complicated. Sillman works until the material speaks to itself, contradicts itself, suggests something it did not know, goes against its own grain.

She paints and draws using innumerable layers, none of which the viewer sees in the final one, but which can be sensed from their active surface. As A. Ellegood suggests, figure becomes so dominant that paradoxically becomes invisible. It is the sense of presence of the shape that builds her approach towards abstraction rather than its exclusion from representation.

“Deep inside his pictures, a shape stands up and listens”. These words by Jayne Anne Phillips closely relate to Sillman’s process of negotiating continuing changes until finding something that emerges from the formal into the flawed and human, building a relationship between that form and the artist’s hand, which oddly listens.