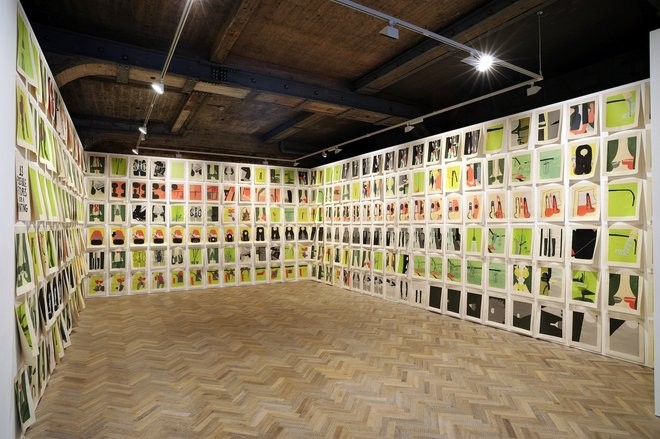 Amy Sillman is one of those artists who are immediately categorised by their medium of predilection. She is and will forever be a painter, and yet no one seems to really be able to clearly identify what kind of painter she is: Gestural Abstraction-ist? Colorist? Post-Modernist? Ironist...? Sillman thinks outside the box, constantly distorting and playing with it, and yet she entirely belongs in the box. She apprehends the medium of painting and embraces the historic – and current – debates around it, with the irreverence and rebelliousness of an activist but also with the erudition and softness of touch of a wise master.

For an audience already aware of Sillman’s paintings, the works in the exhibition will not come as a surprise, with their intricate layerings of abstract shapes, forms, limbs, and an extraordinarily idiosyncratic palette – this time with a predominance of deep dark greens and shades of greys and lilacs. All is revealed here: her elevation of cartoonish imagery, her sense of humour, her pastel accretions, her constant struggle between figuration and abstraction, and between quick and painstaking execution.

There are no direct references in Sillman’s paintings, rather a re-visiting of Philip Guston’s radical stance, of Joan Mitchell’s effects and of Post-War European ‘colourism’. There are also nods to Richard Diebenkorn, Henri Matisse, Helen Frankenthaler and Howard Hodgkin.

Anne Ellegood describes how Sillman's work “acknowledges the limitations of representations”, which is, in fact, for the artist, a constant game. In her own words, she describes how she “liked painting because painting supposedly was dead, and (...) liked the idea of being a female and painting because everyone was saying painting was a male language.”

Each painting is a hybrid which takes multiple shapes and undergoes radical and almost invisible transformations during its gestation. No other work in the exhibition illustrates the process better than a large greenish-yellow painting entitled ‘DUEL’, which recently toured Bennett Simpson’s exhibition ‘Blues for Smoke’, at LA MOCA and the Whitney Museum of American Art. In the catalogue, Simpson describes it:

“Amy Sillman’s painting DUEL submerges a tangle of ghostly limbs beneath an acid surface of green-yellow fog. At the top center of the canvas, a pair of dainty ladies gloves – a feminized version of those objects dropped to commence a duel sit stride a forceful black line shooting up and dividing the canvas from below, a kind of vaginal slit or bottom crack through which the abstraction of the work emerges awkwardly, if undeniably, in a nether realm of female sexuality.”

Hanging with DUEL, a customised Ipad reveals a recent and extraordinary addition to Sillman’s lexicon: an animation which is made up of thousands of hand-drawn computer frames. In Sillmans’s words: ‘The animation takes up where the painting leaves off, the layer of the painting that you see is the beginning of the animation and therefore the animation is a new future. It is of importance to me that people understand the animation as a set of proposals for the future of the painting, as well as a way to reveal its past.’

--
Sillman earned her BFA from the School of Visual Arts in New York and her MFA from Bard College in 1995. She has received numerous awards and grants, including a Guggenheim Fellowship, the Louise Comfort Tiffany Foundation Award, the Guna S. Mundheim Fellowship at the American Academy in Berlin in 2009. Her work has been widely exhibited and collected in public and private collections, including: The Museum of Modern Art in NY, The Art Institute of Chicago, the Metropolitan Museum of Art, the San Francisco Museum of Modern Art, the Hirshhorn Museuym and Sculpture Garden in Washington DC, Tate and the Whitney Museum of American Art. A survey of her work will be exhibited in 2013 at the Institute of Contemporary Art in Boston, which will be accompanied by a catalogue.

Amy Sillman will be in conversation with Mark Godfrey at ICA, London Friday 6 September at 1pm.
www.thomasdane.com