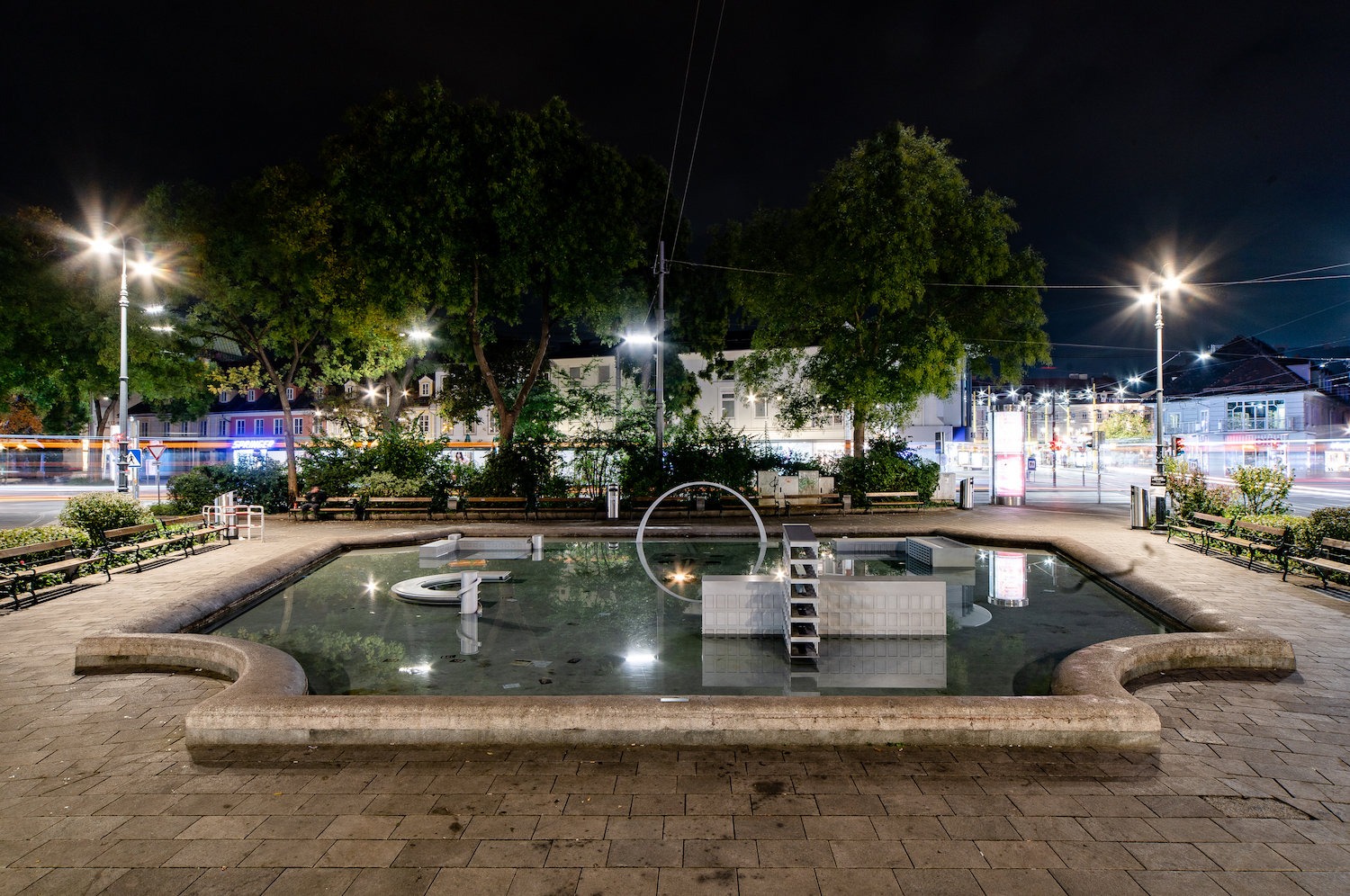 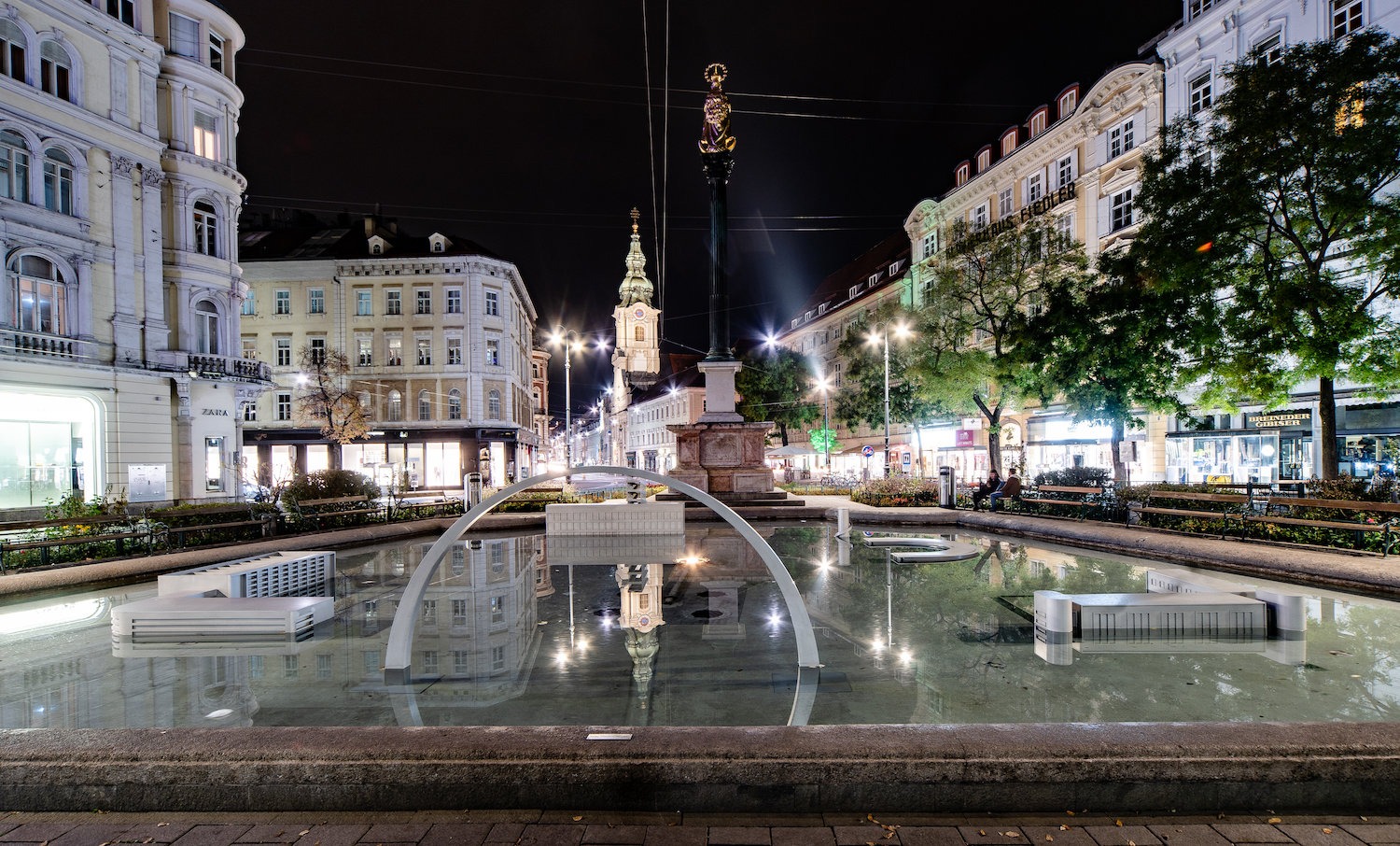 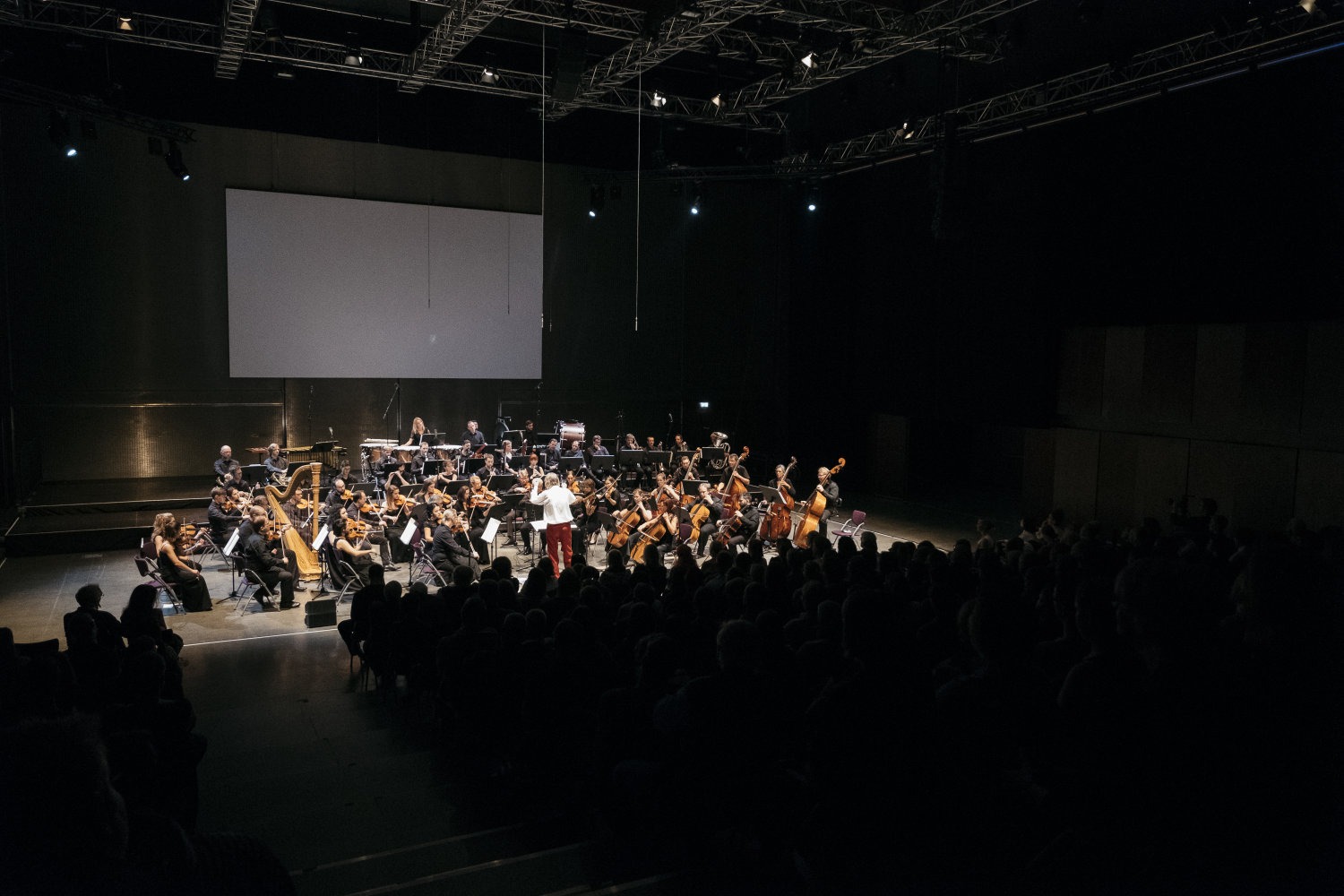 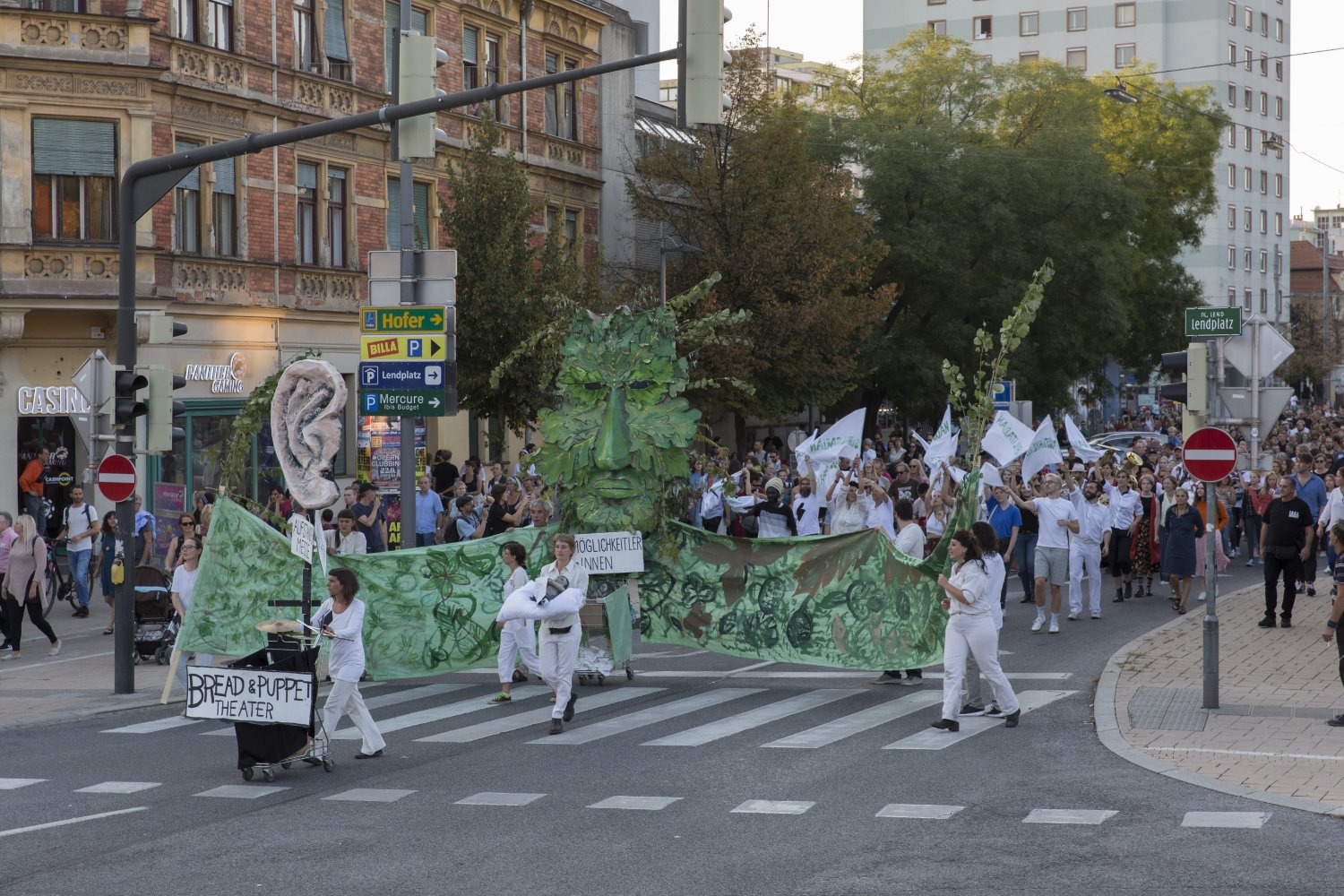 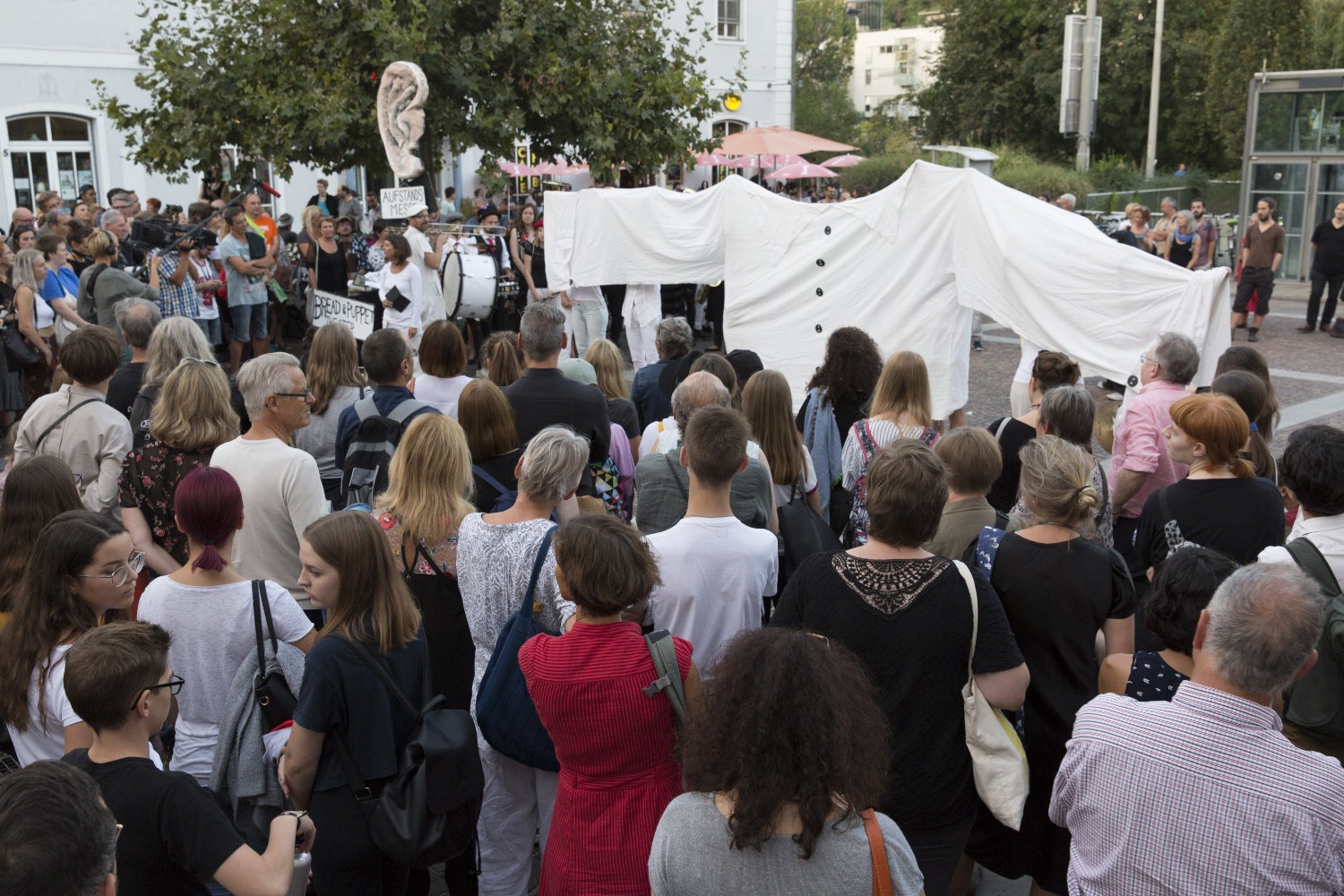 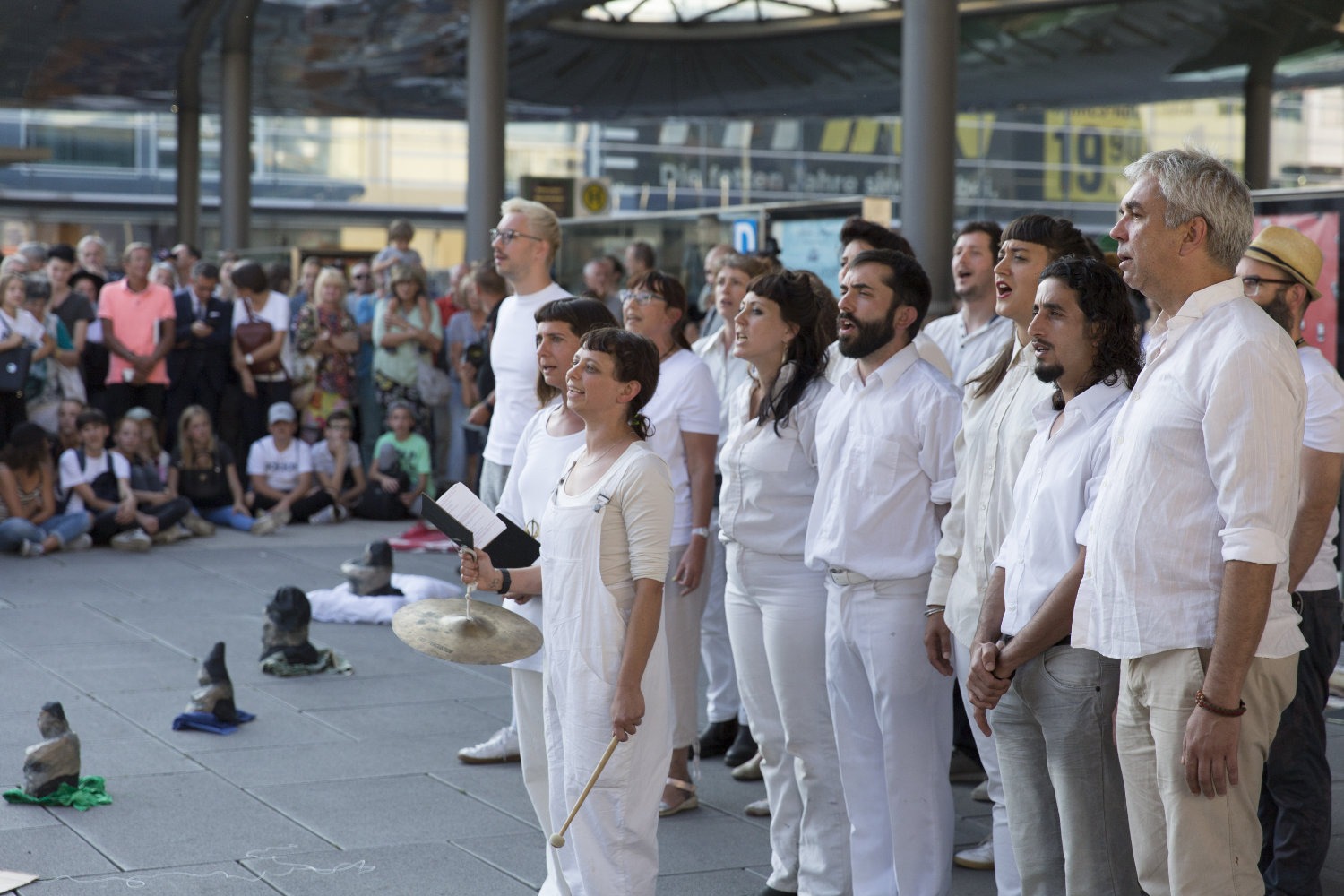 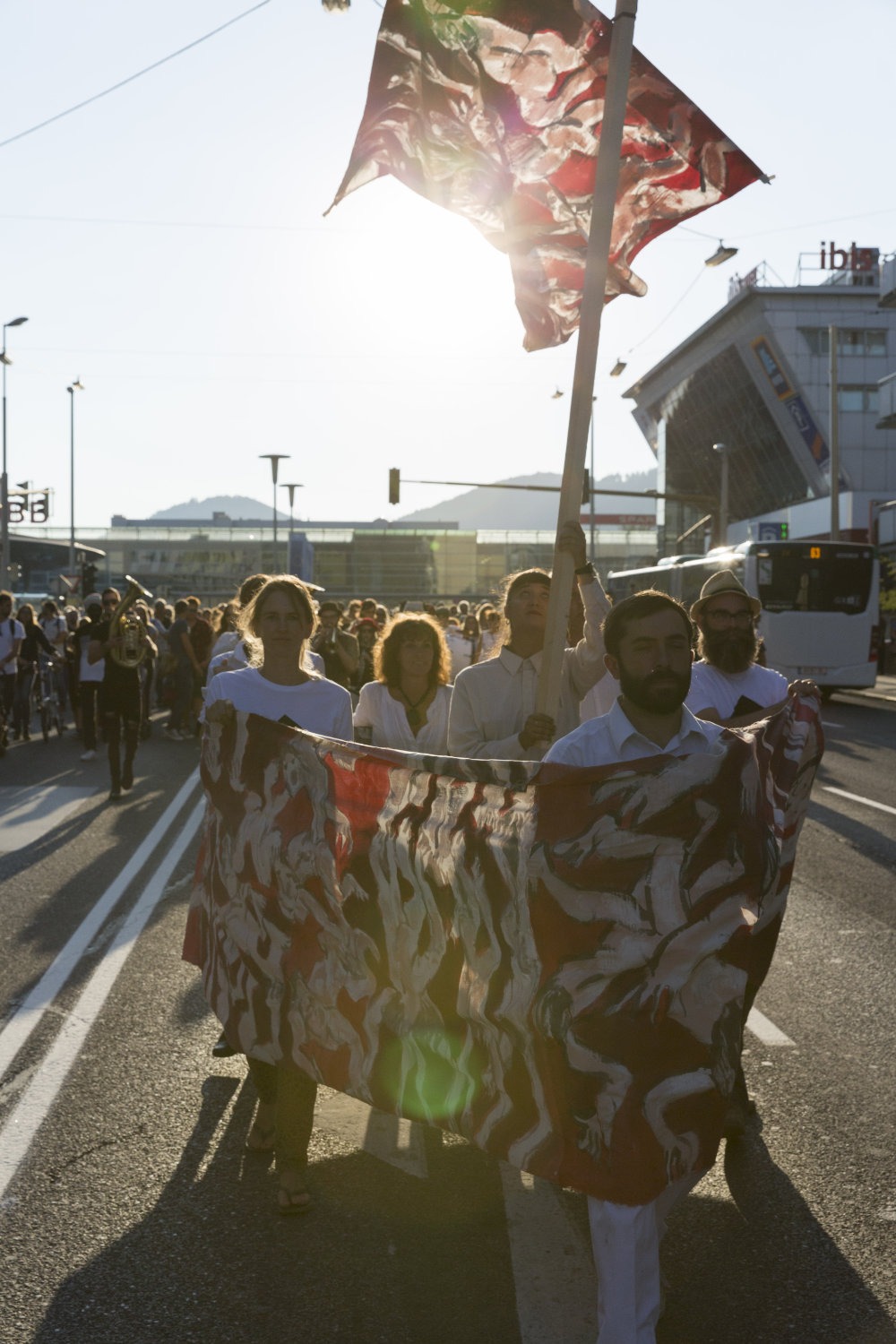 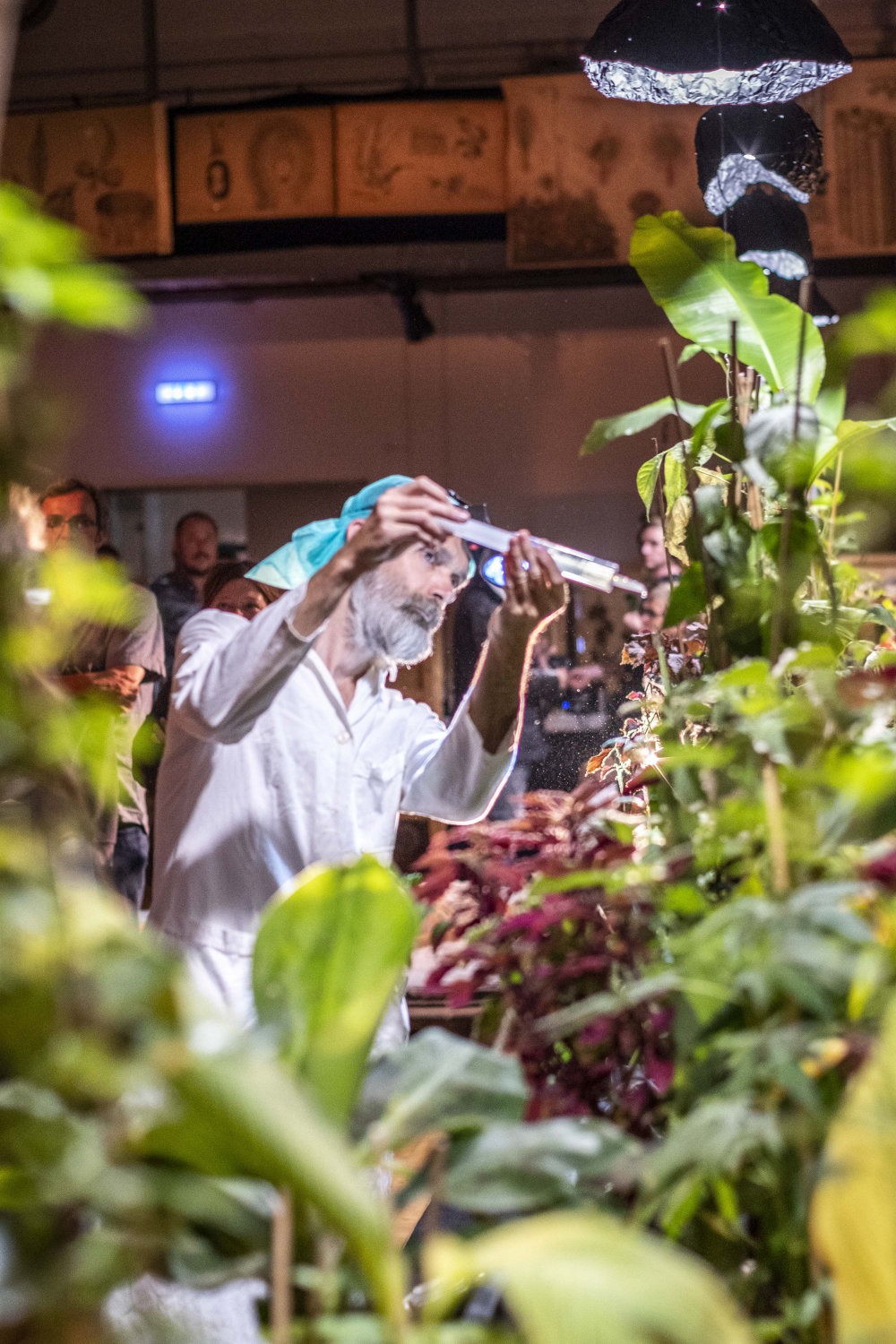 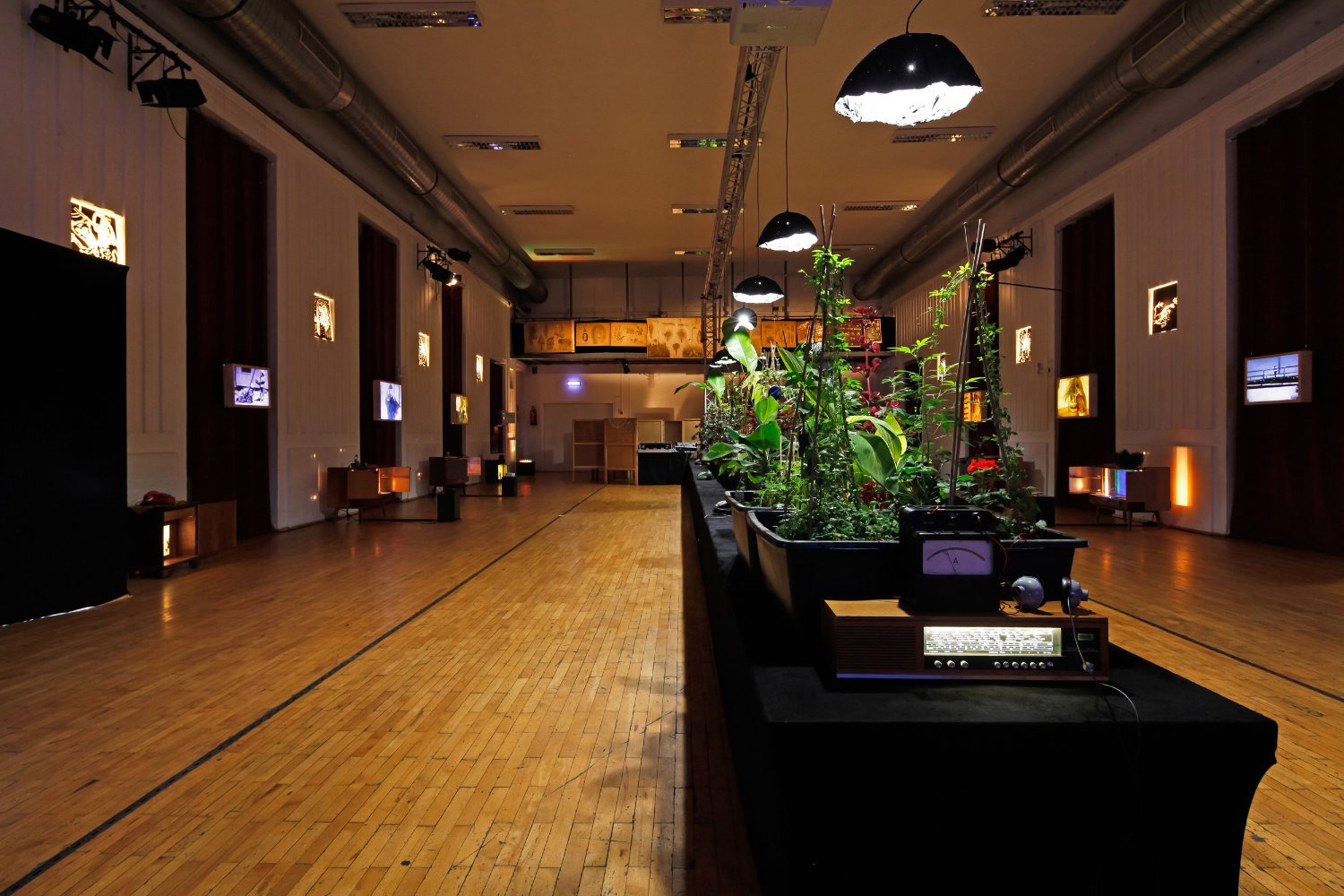 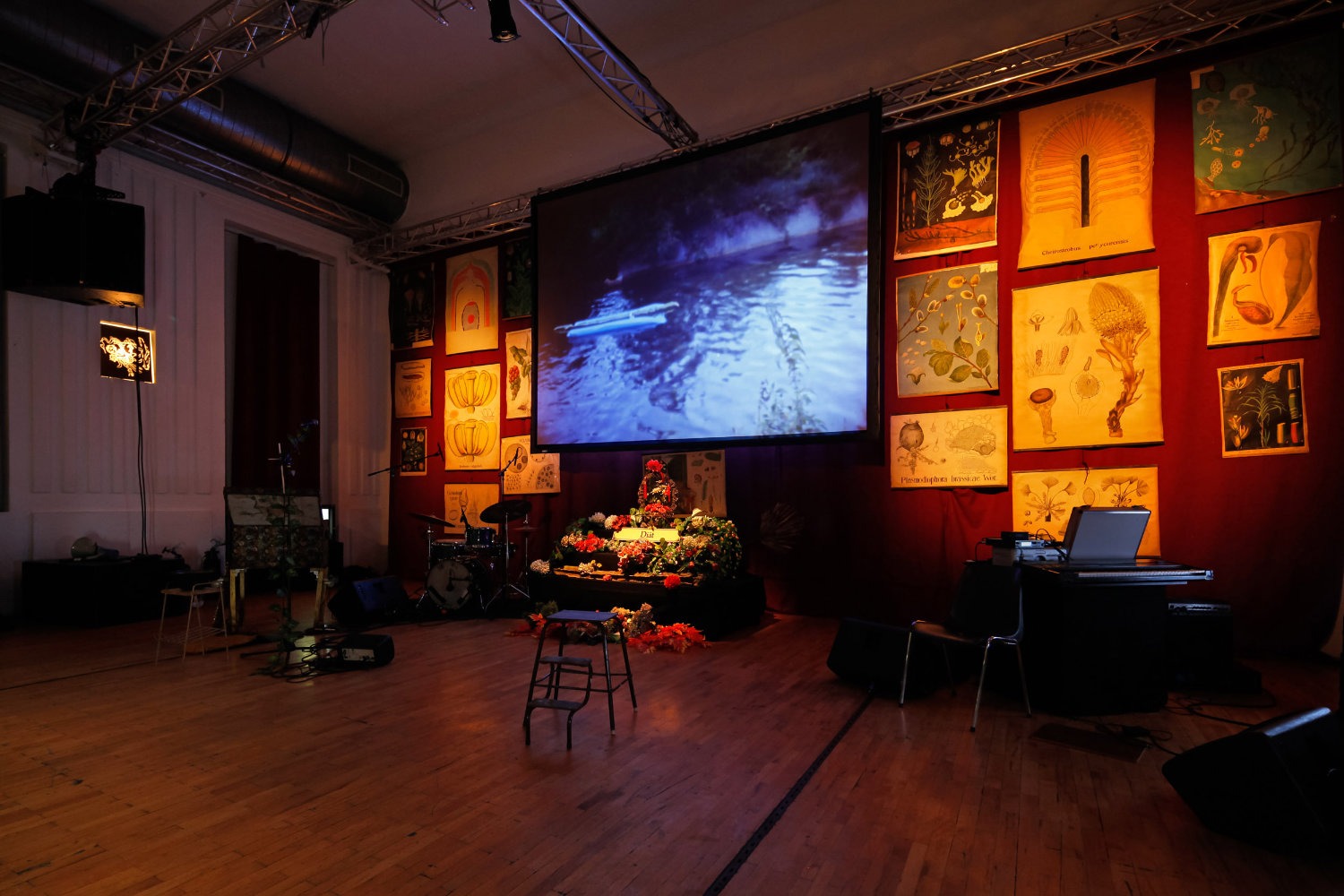 The core program of this year’s steirischer herbst is called Volksfronten. The title—deliberately kept in German and in the plural—is as disturbing as it is ambivalent. Many a visitor, and not just German-speaking ones, will scowl, if not shiver, at the sight of “Volk,” stirring up, as it does, the darkest memories. Allegedly innocent, this word marks the slow, early 20th-century shift, in Germany and Austria, from the civic understanding of the notion of “people” to its purely ethnic and racial iteration, which facilitated and propagandized the advent of nationalism and fascism. And this is precisely why a neo-Nazi, white supremacist group founded in the United States in the 1990s chose to call itself “Volksfront.” The “front” part, however, was perversely appropriated from popular fronts, broad antifascist political coalitions of the left in the 1930s. While being definitely post-radical (the Comintern had to authorize a temporary ban on world revolution, after all), the Popular Front maintained its fiercely militant and intransigent character towards fascism, till it was betrayed by another coalition—the 1939 Molotov-Ribbentrop pact—and, just in time, replaced by slogans of peaceful cohabitation.

In our current times, all over the world, the state propaganda machine, rising xenophobia, anti-refugee politics, and the complicity of the “entitled” population in those structures that maintain its privileges offer astonishing and alarming déjà-vus of the 1930s. Insidious forms of racial and ethnic segregation disguised as integration, or systems of control and manipulation presented as recreational social media are being normalized and depoliticized; they are no longer incompatible with private liberties and a “modern” way of life. But there does not seem to be any united front standing up against this encroaching fascism. Instead, we find ourselves fighting on many smaller fronts over myriad, mostly cultural issues, where one increasingly confronts the notion of one or another “Volk,” which seemingly has a right to its traditions, national feelings, and religious beliefs—a right not to be offended by any disturbing others. While we are busy respecting our differences, we are no more able to think our common ground and our common struggle. The 1990s defamation and demise of socialism as real politics, and communism as its idealistic horizon, certainly contributed to this fragmentation.

It is The Sound of Music, the Hollywood fantasy of Austria, revisited acerbically by Laibach for steirischer herbst this year, that demonstrates how a seemingly antitotalitarian and antifascist critique might contribute to the rebirth of a new head of the same fascist hydra. The narrative that Hollywood bought (and successfully sold) is one about a small, patriotic, and edelweiss-faithful Austria opposing the rootless Nazis that have nothing of their own but the will to impose their rule. It is the Cold War narrative, where Nazism is represented as a version of a dangerous internationalism not unlike communism, and where nationalisms are legitimized through their alleged struggle for independence. The current political climate in Central and Eastern Europe, on the border of which Graz is located, shows very well how this legitimation created a nest of worms of “our little fascisms,” to mention the title of a cluster of interviews and debates that is part of the Volksfronten Ideas program.

steirischer herbst's main project this year, curated by the festival team, explores these issues through what can be understood and experienced as a single expanded exhibition spread through town and over many venues. Some of its elements are installations, others performances, and others still symposia or panel discussions—under the overall title Ideas—all specific to the larger parcours in time and space.

There is a decisive focus on Graz’s locality, shaped and overwritten by a troubling, partially-repressed history. Many of Volksfronten’s contributions are new commissions addressing urban and regional narratives, presenting a new way to inhabit the city’s social spaces and be engrossed in the stories they might tell. They address the inscription of 20th-century politics into the structure of the city and the surrounding region, which now appear in their sometimes-bizarre relation to global processes and stories from elsewhere, in which the purported normalcy of the global order reveals itself in all its surreality and weirdness.

Together they build a larger, grander narrative, each of its parts interconnected both on the physical map of Graz and on the calendar of the festival. There is no one single right way to explore this story, but it is preferable to see projects several at a time; not isolated from each other, but in a dialogue, sometimes even in conflict.

steirischer herbst pursues a critical agenda and supports practices that are engaged and engaging. That does not mean that the festival is simply a platform for alternative politics. Instead, it aims each year anew to turn the city into a stage upon which art’s unique imaginative potential—its capacity to tell wild stories and shift shapes, to make impossible conjectures and poetic jokes, to take over spaces and occupy the imagination—is on full view.