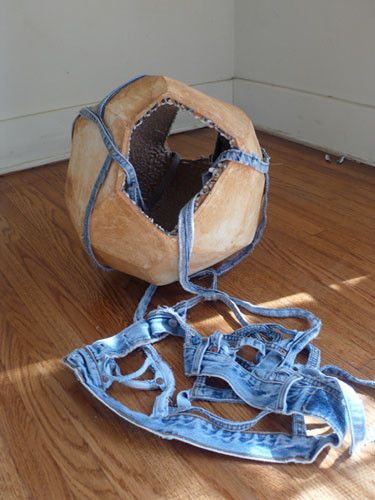 Concurrent with Amy Sillman’s show, Anna Sew Hoy will present the exhibition Holes in the gallery’s Backspace. The exhibition consists of a group of nine sculptures, which continue her exploration of hand-built clay and assemblage. These works were made to create and frame space; space to look through and space to hold something else. They are sculptures to see and see through. Sew Hoy works with cast-off sunglasses and denim jeans, old cell-phone cords and gold chains; alongside classic sculpture materials such as clay, steel and rubber. The resulting works suggest an adorned body, as they also remain willfully abstract. The sculptures contain a conversation with surface, interiority, exterior, façade, function, and imaginary places, like mirrored landfills. Product display is a question here, and the continuing obsolescence of cultural artifacts, as things go out of fashion and use. The ancient symbol of an ankh bumps up against wraparound sunglasses to suggest a continuity of the man-made. As well, the works contain holes and voids, windows and breathing room, while they frame events such as a gold chain becoming a limp line, and the seams of jeans becoming a web that catches other detritus.
Anna Sew Hoy’s work has been included in numerous museum exhibitions such as the California Biennial 2008, at the Orange County Museum; “Now You See It,” at the Aspen Art Museum; “Eden’s Edge,” at the Hammer Museum, Los Angeles; and “One Way or Another,” at the Asia Society in New York. She has had solo exhibitions at LA><Art and Karyn Lovegrove Gallery in Los Angeles; and Renwick Gallery and Massimo Audiello Fine Art in New York. She was awarded a United States Artists Broad Fellowship in 2006, and was most recently awarded a Durfee Foundation Grant to support her collaborative work with Eve Fowler, for their project called Two Serious Ladies.
www.sikkemajenkinsco.com