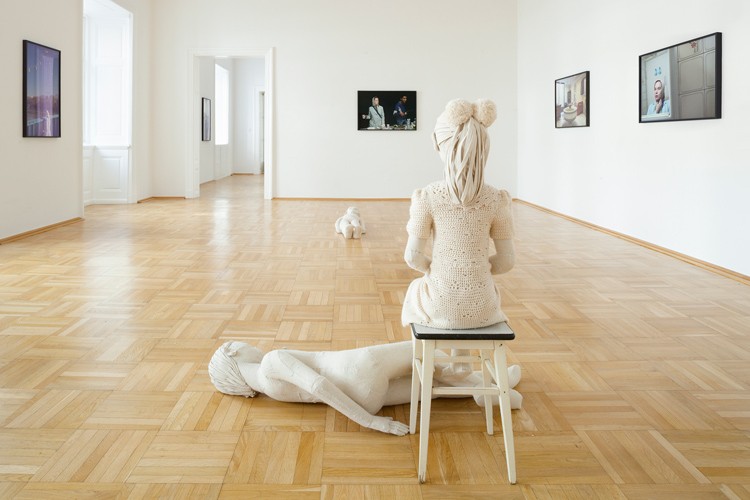 Aneta Grzeszykowska’s works take a socio-cultural, psychological, and existential approach to identity. She often uses her own body as a performative tool in her photographs, sculptures, and videos in which she explores the relationship between body and media, exposing identity as a cultural construct through masks, role-playing, fictions, and computer-based retouching.

In our third solo exhibition with Aneta Grzeszykowska, we are showing a series of photographs titled Iranian Film Stills, which were created as a kind of travel journal in 2015. They show Aneta Grzeszykowska, accompanied by her art partner and husband Jan Smaga and their daughter Franciszka, on her way to Isfahan, Iran, where she was awarded an artist-in-residence grant by the Studio of Contemporary Creation, which also organized a retrospective exhibition at the end of her stay.

The 75 photographs in her travel journal were mostly taken by Jan Smaga, but some were also taken by people passing by. The pictures document the family’s journey from the beginning to their arrival in Isfahan, progressing from right to left, as is common in Arabic books. If read in the “European” direction, however, the journey is shown in reverse. In the pictures, Aneta Grzeszykowska is wearing a headscarf over her hair in accordance with the country’s laws. This headscarf is also a reference to her photographic series Untitled Film Stills from 2006, which is a reinterpretation of Cindy Sherman’s series of the same name from 1977-1980. With their clearly feminist character and focus on the image of women in modern Iran, the scenes from Iranian Film Stills walk a fine line between wearing a costume in the style of neo-realist cinema, and an enforced dress code.

The second series of works in this exhibition consists of doll sculptures sewn out of wool that represent future stages in the life of Grzeszykowska’s five-year-old daughter, Franciszka. Unlike her previous dolls – which were often dark gray, were dressed in clothes from Grzeszykowska’s childhood, and which she says were “three-dimensional black holes that have taken a human shape” – these newer dolls are lighter and point to the future. They wear the same clothes that Franciszka might wear in a few years, and to each doll belongs a photo to be taken when her daughter has grown into the clothes, meaning the work will first be complete when she has reached a corresponding age.

In the video Hymn, Grzeszykowska focuses on the body of a dancer as a performance tool. Painted in alabaster white and resembling one of the dolls, she lies on her back on the floor, while a group of ribbons extending out from her chest are rotated in a star-like pattern. Originally meant to be accompanied by a soundtrack by the Polish author Dorota Masłowska, in this version Grzeszykowska instead let her daughter improvise on the piano. This improvisation thus not only allows more room for development than a composed piece of music, it also integrates her daughter into yet another work. In transforming her own family into artistic material, Grzeszykowska blurs the line between private and public, evoking the question of whether her art is a result of her life, or the other way around.

Aneta Grzeszykowska was born in Warsaw, Poland, in 1974, where she still lives and works. She studied graphic arts at the Academy of Art in Warsaw. In 1999, she began an artistic collaboration with Jan Smaga. She has participated in major international exhibitions, including the Berlin Biennale 2006, Fotografia Europea – Reggio Emilia 2008, and the Paris Triennale 2012. Grzeszykowska received the Polytika Passport Prize for her solo exhibition in the Zachęta – National Gallery of Art in Warsaw in 2013.
www.schwarzwaelder.at