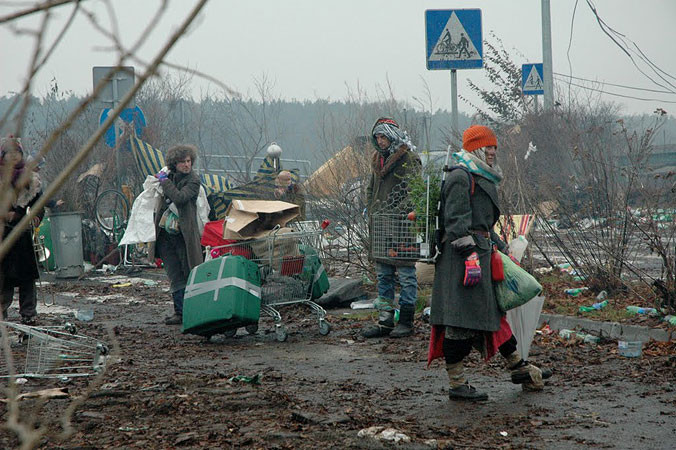 © Zbigniew Libera
THE LAST FILM
Artists on their own failures and the failures of their gallery
4 - 23 December, 2010

Seven years will have passed in the fall of 2010 since we opened Raster gallery in a townhouse at Hoża street in Warsaw. In the meantime, the 'common room' ceased to be a common room and Raster turned to be an active gallery of new art known across the European continent. Now it is time for another change. We are closing our seat at Hoża street by the end of this year. Together with a group of artists we want to take advantage of the occasion and recap our endeavours, turning our smaller and bigger failures into a value added.

The artists we have invited to participate in the exhibition called "The Last Film" are Raster's regular collaborators. The title was borrowed from the last film by the Azorro group made this very year. The heroes in the flick are the four artists from Azorro, who get together to do something but the only thing they succeed at is a huge row about who had the greatest contribution to the group's work. The argument ends in the final dissolution of Azorro.

We are not closing the gallery space, which we have occupied for seven years, as a result of an internal conflict. We are trying to look at our work from a distance, undermining all that we have been doing over that period. When inviting the artists to join us in this project, we expressed an expectation for a self-reflection on the one hand, and a creative consideration of the condition of a gallery as an institution on the other. This does not mean that "The Last Film" is a simple collection of older and newer works on a given subject. The presentation not only includes works of art but also their fragments, beginnings or remains, accepted and rejected requests of artists to galleries or galleries to artists. "The Last Film" is also an appeal both to all those who used to visit us at Hoża street, as well as those who have never been here: don't ask what's next, just come and see the end.
rastergallery.com