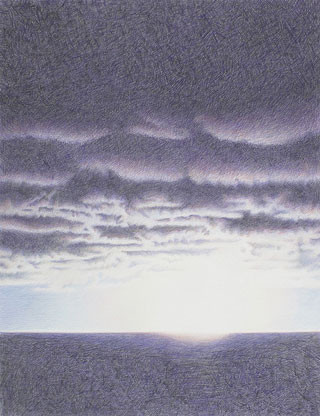 Las Golden" consists of 11 meticulous drawings with the story set in the U.S. Their common theme is the American landscape, but not the one created by nature. It is the staged landscape, seen in photographs, films or commercials. We are dealing with a cultural cliché of a particular kind, depicting landscape as a kind of a picturesque view fulfilling certain social roles: entertainment (connected with mass tourism or film industry) and propaganda (shaping the national pride). Thus understood, the spectacular aspect becomes the landscape's indispensable feature. The motifs depicted in Elsner's drawings however, have an exceptionally stage-like aura. We are faced with views "enhanced" by human actions: nuclear tests in the American desert or fires devouring the rich neighborhoods of West California. "Las Golden" captures the unusual cultural moment in which aesthetic fascination diffuses the original meaning of the scenes. In one of the paintings ("VIPs"), a group of Very Important Persons observes a nuclear explosion from a special tribune. Beginning in 1950's, observing nuclear tests conducted by the U.S. army in the Nevada desert has become one of tourist attractions offered by Las Vegas - a city situated as close as 100 km from the military nuclear test ground.
Above all, Elsner is interested in the process of aestheticizing that takes place through photography and mass media. Copying the archive and press photographs, the artist enlarges his drawings to a bigger and bigger scale and, using the press mechanisms, intensifies the sensation and seduces the viewer with the scale of the image - the bigger something is in a newspaper the more important it is. Carefully selected stills used by Elsner illustrate the terror of fires and nuclear tests as a spectacular, not traumatic, value. At the same time however, the artist raises the very same question, that of responsibility for manipulating the image, in the realm of art. Is it not art that has served, and often serves, as a tool for aestheticizing the world?
The exhibition is supplemented by three drawings from the "Still" series which - though indirectly - evoke the Hollywood context of landscape games. The works depict landscape fragments from Cindy Shermann's celebrated "Untitled Film Stills" series (which, it should be noted, has recently been the object of Aneta Grzeszykowska's artistic actions). By copying Shermann's stills, Elsner excludes the artist's figure leaving solely the background. His drawings depict landscape as an "empty stage", a space for possible actions. Once again the landscape proves to be an artificially, culturally shaped scenery. It is a visualization of the "Americanness" which holds the proud militarism and the devoid of terror, Hollywood-like, amusing images as its means.
rastergallery.com