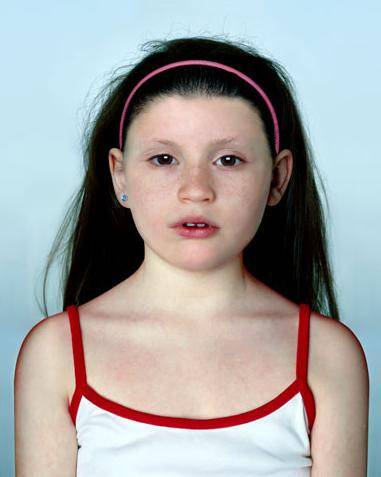 The latest project of Aneta Grzeszykowska (born 1974), known for the series of photographic works realized with Jan Smaga ("Plan", 2003, "YMCA", 2005), is a set of portrait photographs. At the first glance, the photographs depicting seemingly ordinary looking people of different age and gender appear to be a variation on the well-known portrait series by Thomas Ruff. In fact we are dealing with a manipulation that is far more reaching. All the familiar looking pictures are actually images of people who do not exist, and have never existed, those people were brought to life by the artist with the use of Photoshop. The project, amazing by its perfect illusionism, is more than mere computer engineering. Surprisingly, real emotions come into play between the people from the photographs and the viewer. Feelings of sympathy or strangeness, a desire to know more about someone who doesn't actually exist or even attempts to fill their empty biographies with some fictional content.

Even more fascinating than the making process itself - which was certainly an interesting instance of Creation - is the psychological process of our perception. Who are those people if they do not exist? At whom, or at what, am I actually looking? The whole project is a peculiar game of appearances: we take the artist at her word when she says that the portraits are not "real", though while looking at them we could just as well think it's the other way round. The lesson of truth and illusion proves interesting.

Along with the "Album" - the previous work of Aneta, exhibited in Raster last year - portraits form a curious diptych, based on the fundamental issues of faith towards the photographic image and its performative power. The main character of the "Album" has disappeared from her own life, and the characters from the portraits appear, even though they had never existed among the living. In fact, the artist's game seems to go even deeper than that. Rather than being a yet another revision of the photographic medium it becomes a question - asked in a contemporary language - concerning the matter of existence and non-existence. Above all it is an attempt at summoning the basic existential emotion: "how does it feel not to exist?"