canary in a coal mine 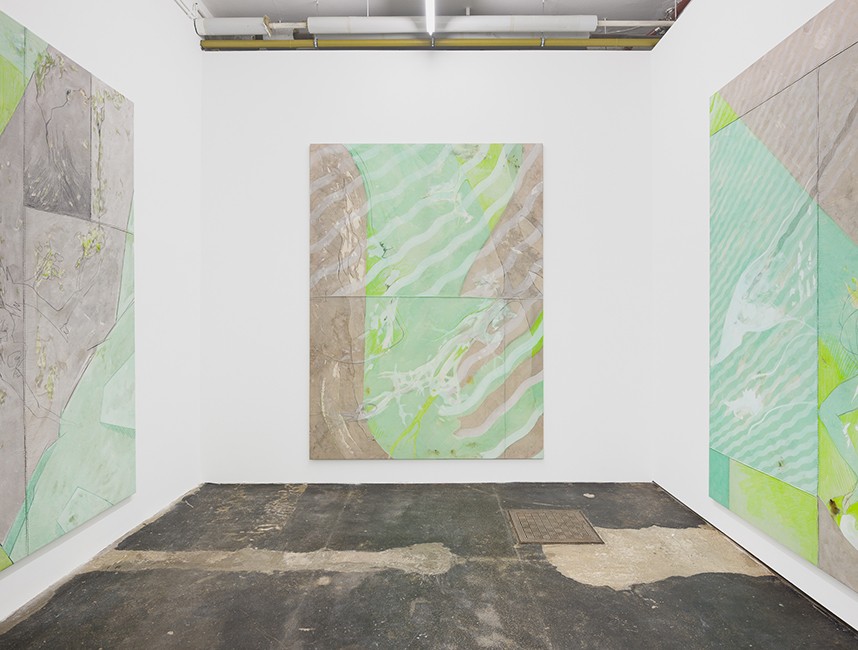 Galeria Plan B is pleased to announce the first solo exhibition of Iulia Nistor, opening on the occasion of Gallery Weekend Berlin 2017.

An allusion to the caged birds that would warn miners when in danger, the exhibition title canary in a coal mine is nevertheless a metaphor for uncertainty and sensibility as a guiding principle. Over the past two years Iulia Nistor has been developing Pieces of Evidence – a format of paintings that share the dimensions 40 x 50 cm or 50 x 40 cm and are painted in oil on wood. A selection of works from this series is displayed in the main exhibition space and lead to three large canvases. Often large-scale paintings originate from the process of engaging in the possible meaning of a work from the Pieces of Evidence. Rather than seeing these interpretations as results, the ensuing works reveal their own conditions and limitations, our human need to make sense out of things and thus direct back to the phenomenal density of the Pieces of Evidence paintings.

“Brains are balls. We don’t see what the hand can do or how it can move paint around, rather body parts—eyes, ears, brain—are subjects. Paintings of knots, bundles, or boulders, big balls, mostly single, large and centered, recall brains. We hold them, turning them over, looking at them in the light, ultimately to smother them to a halfway death in paint.

We aren’t studying her hand we are studying the mind. The paintings deal with an interiority that is impersonal. Psychoanalysis falls away. Particularity, personality, personal experience are not the currency here. There’s no use giving expression to the psychoanalytic subject which is handicapped and insufficient. Rather we have systems and diagrams, the look of science. One of the brain-cum-balls has a section like the door of a spaceship coming off its surface, but it’s leaving from the backside so we still can’t see what’s inside. In consistent browned pastels, this verges on a cartoon representation of obscurantism. Like this doorway to the brain out of view, openings throughout the work reveal little.

(...) Anti-drama begs an unusual question: Can painting be peaceful or must it agitate? Is either instance, if expressed through tone, a kind of design? Can art be a place to find solace? Communication, or more specifically the bodily apparatuses and channels that allow it, are reconstituted as tone, but it is also a changing into, a fantasy of disappearance and reincarnation into brown balls and chunks, beans and rocks. This anti-drama, the paintings’ placid plainness, crystallizes then the ultimate drama of Iulia’s attempt to smother perception by putting a picture to it. Balance within the picture is maintained to allow a confrontation outside it. Iulia’s work consistently recalls Courbet, 19th century Realist painter who also sought a union between himself and his paintings of boulders, women sifting grain, and men breaking apart stones. For both, this dialectic of mind and body and then body and object entails a lust for innocence and a renouncing of the responsibility to communicate, recalling childhood, infancy, and a proposition of something like willed autism. In the end we can’t get close enough to see whether what remains is a smooth little pebble, soft and sweet, or a rough colossal cliff. How big is the brain?

A critic of Courbet’s time complained that realism’s foolishness is believing the world is six-feet deep because one is myopic. The paintings show a bird, a diagram of vision, ears, and even a woman, but these soft living things, able to perceive and interpret, are not lifelines and won’t lead us out. I can’t think of anything that conjures silence more than two painted ears. (Is paint the opposite of hearing?) Fragments of a head don’t make a person. Rather we study, like a book on how to see or how to hear.”

Sydney Schrader, The Form of the Big Ball, excerpt from exhibition leaflet

Iulia Nistor, born 1985 in Bucharest, Romania, lives and works in Frankfurt am Main. She studied painting at the Akademie der Bildenden Künste in Nürnberg with Thomas Hartmann and at the Staatliche Hochschule für Bildende Künste Städelschule, Frankfurt am Main, with Amy Sillman and Monika Baer