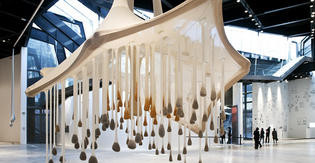 MACRO – Museo d’Arte Contemporanea Roma – unveils a new design for the ENEL Gallery with works by (international artists) Arcangelo Sassolino, Ernesto Neto, and Dan Perjovschi.
An ideal showcase for different art forms, with these three artists MACRO is offering multisensorial experience, inspiring a greater awareness of our own position in space and allowing us to take full possession of the works.

The new display presents While Nothing Happens, made for MACRO by the Brazilian artist Ernesto Neto (Rio de Janiero, Brazil, 1964) for the solo exhibition in 2008, which was curated by Dobrila Denegri, and made possible by the support of Associazione MACROAmici. He has adopted a new approach to the work, drawing on its visual appeal and alluring aromas, and making it a plastic place which, in its interaction with the gallery, offers visitors an intimate, meditative place to collect themselves. While Nothing Happens, is a fragrant, fluctuating installation suspended in the air and containing five ground, coloured spices: black pepper, cumin, cloves, ginger, and turmeric. Justaposing materials and spaces, colours and smells, Neto has created a work that calls on a viewer’s every sense, breaking down the distances between art and life, and creating “an art that unites and that helps us interact with others, showing us the limits, not as a wall but as a place of sensations, exchanges, and continuity.”
Ernesto Neto was born in Rio de Janeiro, Brazil in 1964, where he currently lives and works. His works have been shown at several international contemporary art museums in addition to the Sao Paulo Biennale in 1988, Kwangju Biennale in 1995, the Biennale of Sydney in 1998, Liverpool Biennial in 2000 and 2002, and the Venice Biennale in 2001 in 2003. The most important projects created by the artist in recent years include solo exhibitions at MIMOCA Marugame Museum of Contemporary Art, in Japan; MOCA in Miami; the Konsthall in Malmö; the Museum of Contemporary Art in Kanazawa; MOCA in Los Angeles; the Kunsthalle in Basel; and London’s ICA. In 2006 he took part in the making of a large scale installation inside the Panthéon for the 35th Festival d’Automne in Paris. He has also shown at numerous galleries, including Max Hetzler in Berlin; Tanya Bonakdar in New York; Fortes Vilaça in Sao Paulo; and Yvon Lambert in Paris, and he has taken part in group exhibitions at the Guggenheim in New York and Bilbao, P.S.1 and MoMa in New York, the Centre Pompidou in Paris, Kiasma in Helsinki, MORI Art Museum in Tokyo, MAK in Vienna, the XXI Century Museum in Kanazawa, the ICA and the Barbican Centre in London and the Musée de beaux-arts of Nantes.
www.museomacro.org