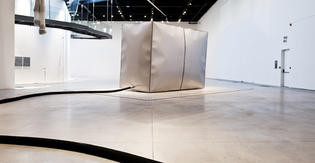 MACRO – Museo d’Arte Contemporanea Roma – unveils a new design for the ENEL Gallery with works by (international artists) Arcangelo Sassolino, Ernesto Neto, and Dan Perjovschi.
An ideal showcase for different art forms, with these three artists MACRO is offering multisensorial experience, inspiring a greater awareness of our own position in space and allowing us to take full possession of the works.

The first work on display upon entering the Gallery is Piccolo animismo (Small Animism), by Arcangelo Sassolino (Vicenza, 1967) specially designed for MACRO. This work brings sound to the gallery, giving a voice to its post-industrial, technological tensions, while also feeding on the space it is placed in.
Piccolo animismo is a large container consisting of stainless steel sheets welded together: a cyclical process of pumping in and sucking back out highly pressurised air means that the unit is subject to astonishing, destabilising changes, reaching the very limits of tension. We witness this as unexpected thunderings. By modifying the physical nature of the work, Sassolino creates a sculpture that is itself a “creator of forms”, forcing the material to its limits. Viewers are caught up in expectation of the event, experiencing these tensions and conflicts, and thus putting their own emotions to the test and identifying with the pain and transformation to which Piccolo animismo is subject.
“By manipulating certain industrial technologies and their brutal functional and aesthetic realism”, explains the artist, “I have attempted to give concrete form to a sense of energetic terminalism. I try to propagate a vulnerable psycho-physical impact”. “Through sculpture, I make it possible to benefit from a phenomenon to which consciousness and reason react when it is taking place or even after it has passed by. If you want to relive the experience, you have to wait for the next time around. In the meanwhile, you only have a recollection and a pending aesthetic.”

The deep, profoundly syncopated breathing of this large installation, echoes the sense of alienation and strong tension of two previous works – Afasia (shown at the Palais de Tokyo in 2008) and Time Tomb (made for the Z33 House for Contemporary Art in Hasselt, Belgium) – while acting on the idea of volumes and proportions, giving them new depth and meaning.

Always fascinated by the limits of form, matter, and movement, Sassolino has filled his work with a physical tension that rocks the work from within: “Every time I’m on a plane I wonder how much stress the wings can withstand, knowing that sooner or later any material is bound to collapse as a result of mechanical stress.” So “why not push these limits of matter against matter – of air against steel, pressure on metal, tons of weight on the weldings – and why not stretch the limits of the material by bringing out the unforeseen as form and sound? Sounds are often produced by the friction, impact and yielding of materials. Sometimes even the most stolid masses - ones you’d never suspect – turn out to be lyrical.”

Arcangelo Sassolino was born in Vicenza in 1967, where he currently lives and works. After studying at the School of Visual Art (SVA) in New York and a six-year stay in the United States, he held his first solo exhibition at the Galleria Grossetti, Milan, in 2001. Sassolino has taken part in important group exhibitions in internationally renowned art institutions. Those in Italy include the Fondazione Bevilacqua La Masa in Venice (2001), Mart – Museo d’Arte Moderna e Contemporanea of Trento and Rovereto, where in 2005 he took part in “Per esempio. Arte Contemporanea Italiana dalla Collezione UniCredit”, C4 – Centro Cultura Contemporanea Caldogno (2006), the Peggy Guggenheim Collection in Venice (2009) and, more recently, the Fondazione Arnaldo Pomodoro in Milan, where he showed his works in “La scultura italiana del XXI secolo” (2010). Those abroad include ZKM – Zentrum fur Kunst und Medientechnologie in Karlsruhe (2006), FRAC in Rheims (2007), the Haus für Konstruktive und Konkrete Kunst in Zurich (2008), the Essl Museum in Vienna (2009) and the Museum Tinguely in Basel (2010). Solo exhibitions include “Afasia” at the Palais de Tokyo in Paris (2008) and “Time-Tomb” at the Z33 Museum in Hasselt (2010). In 2007 he was invited to the “Ginnungagap/Pavilion of Belief” as part of the 52nd Venice Biennale.
www.museomacro.org