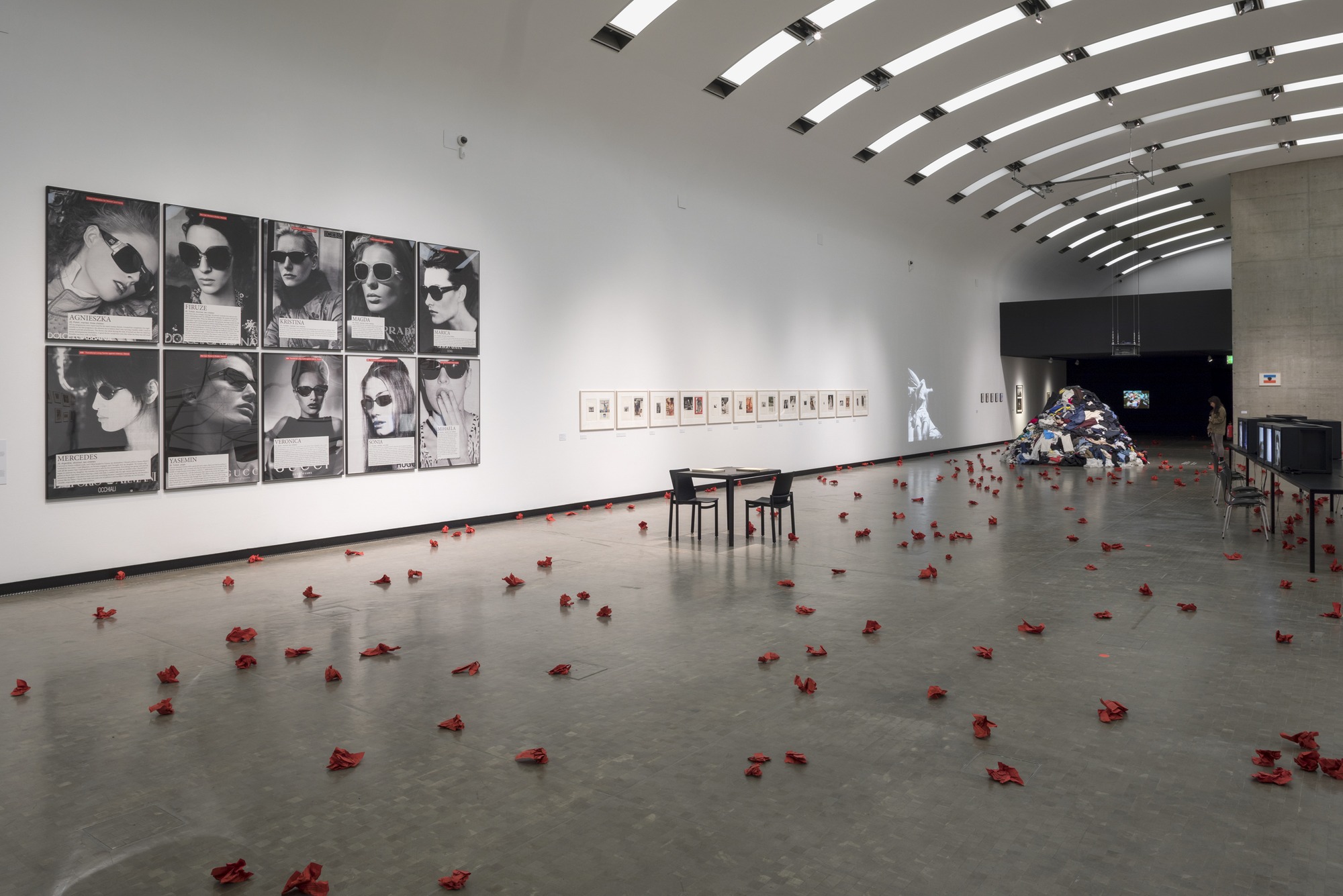 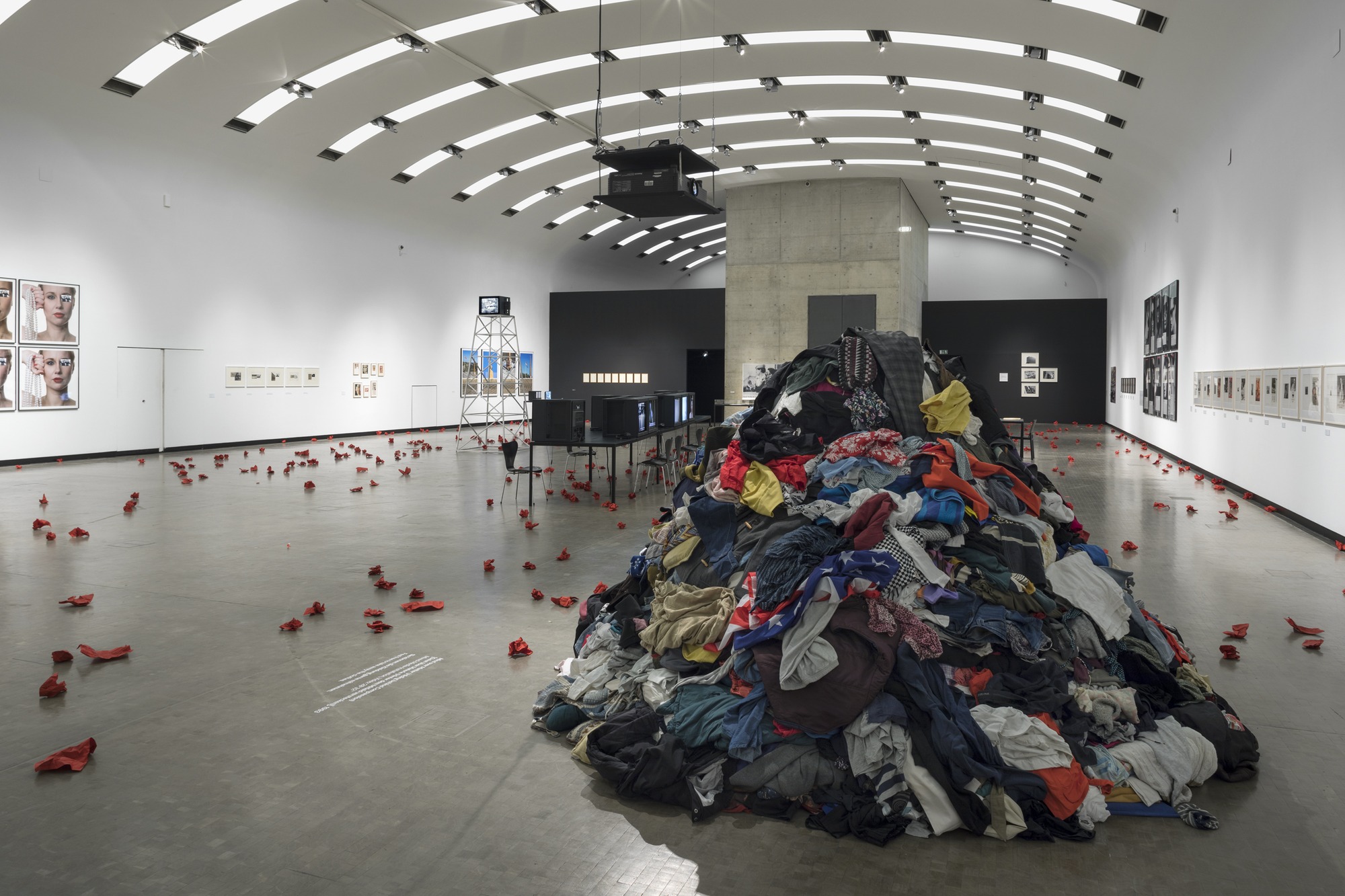 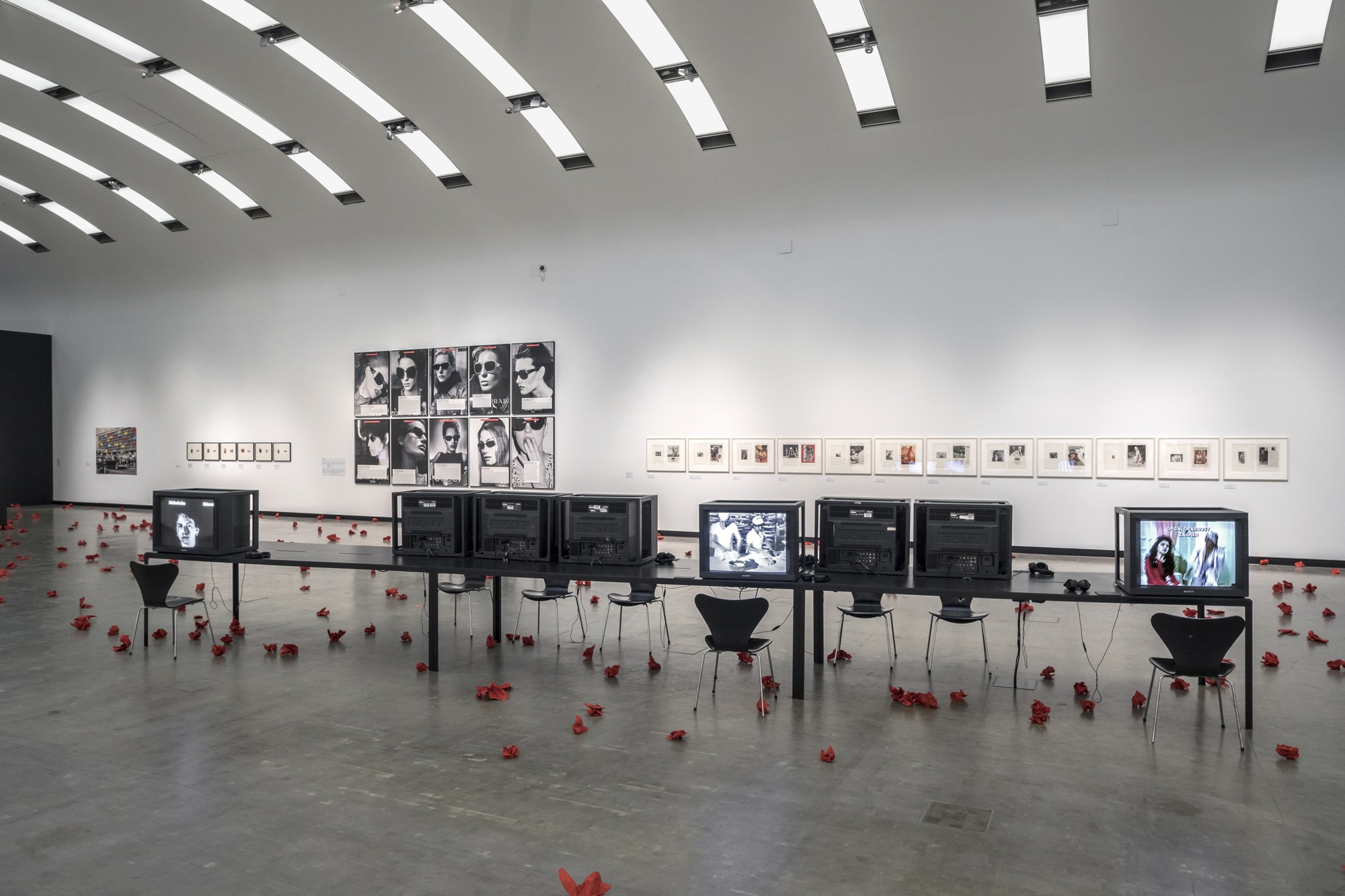 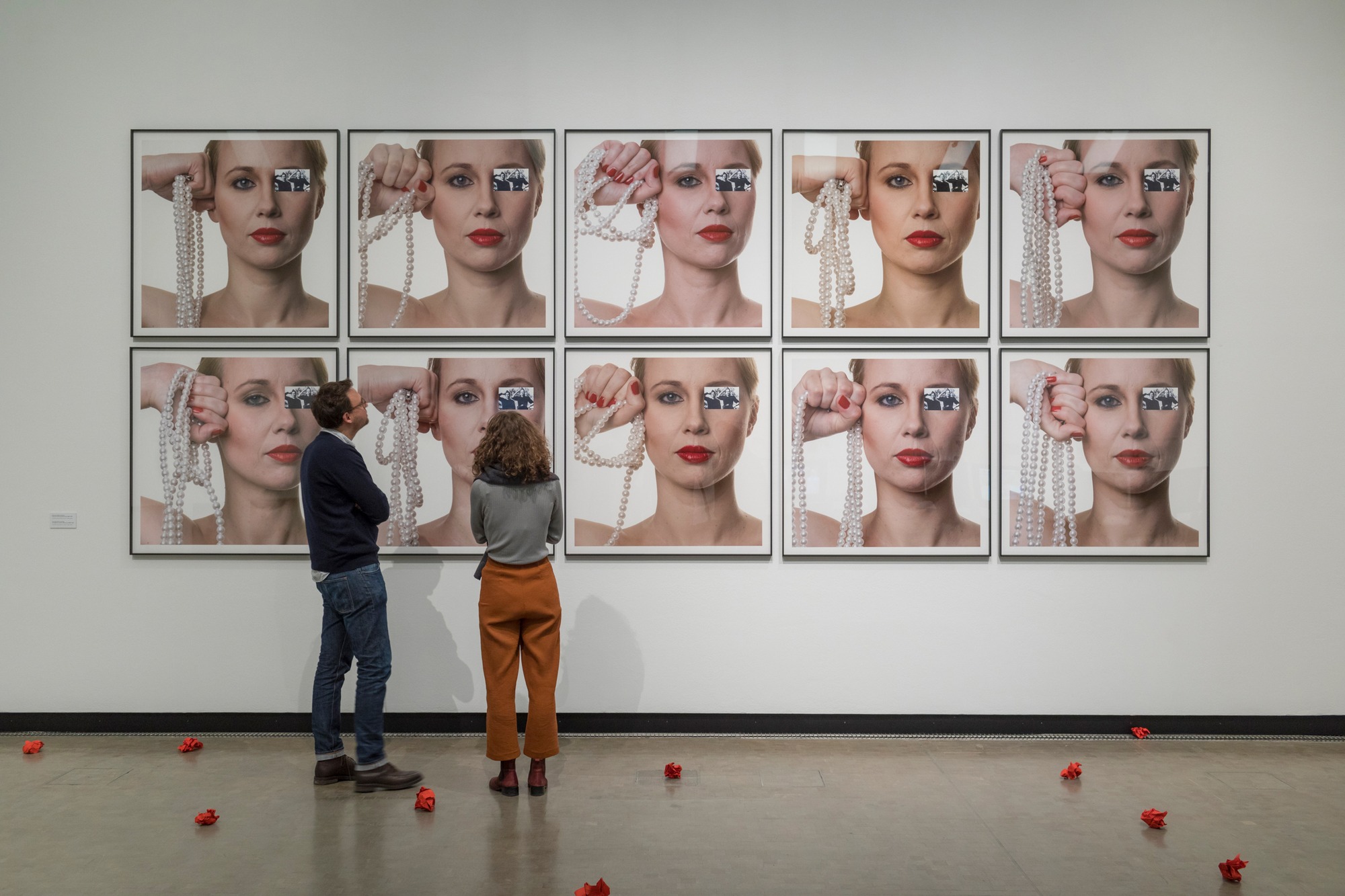 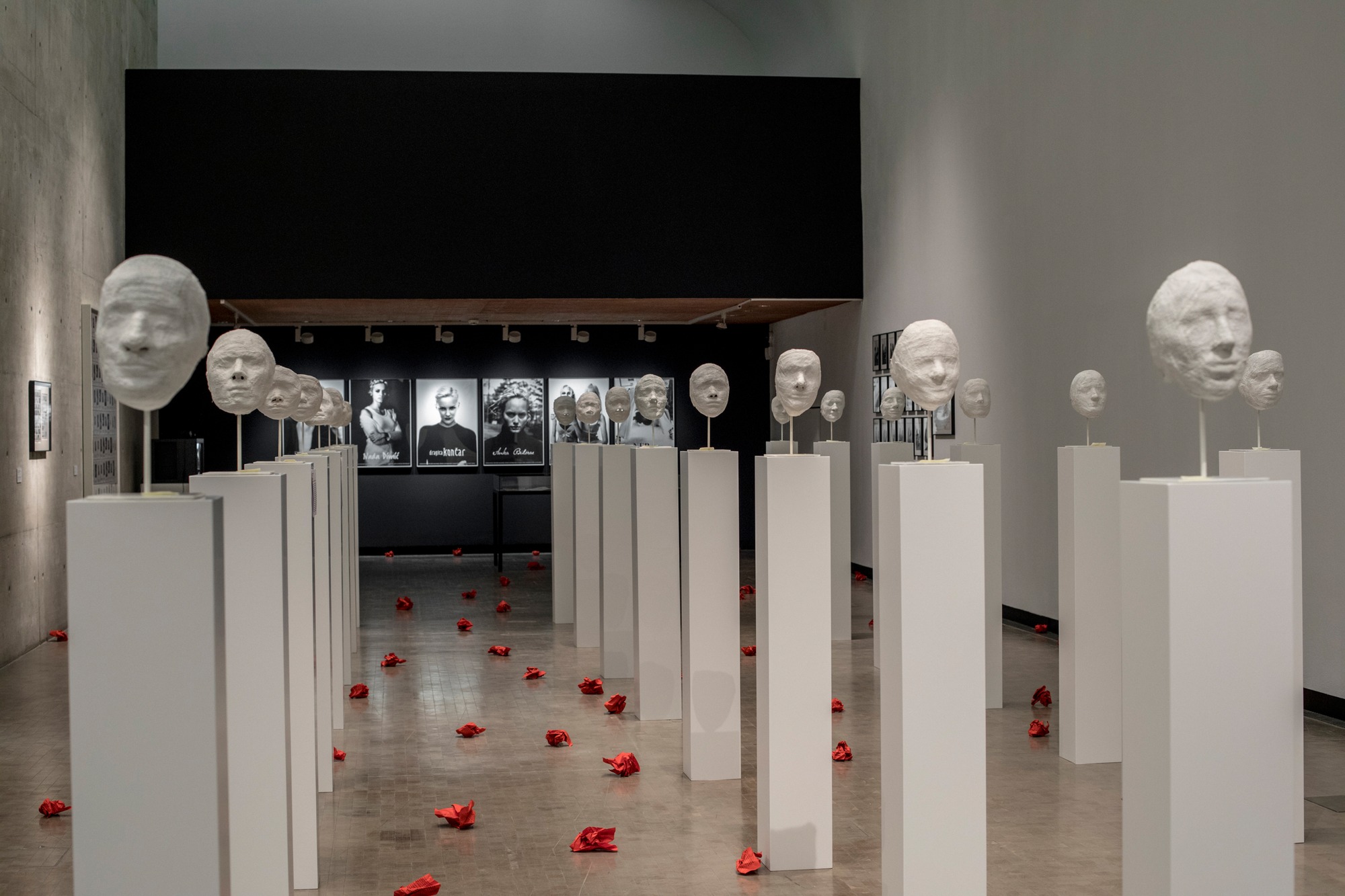 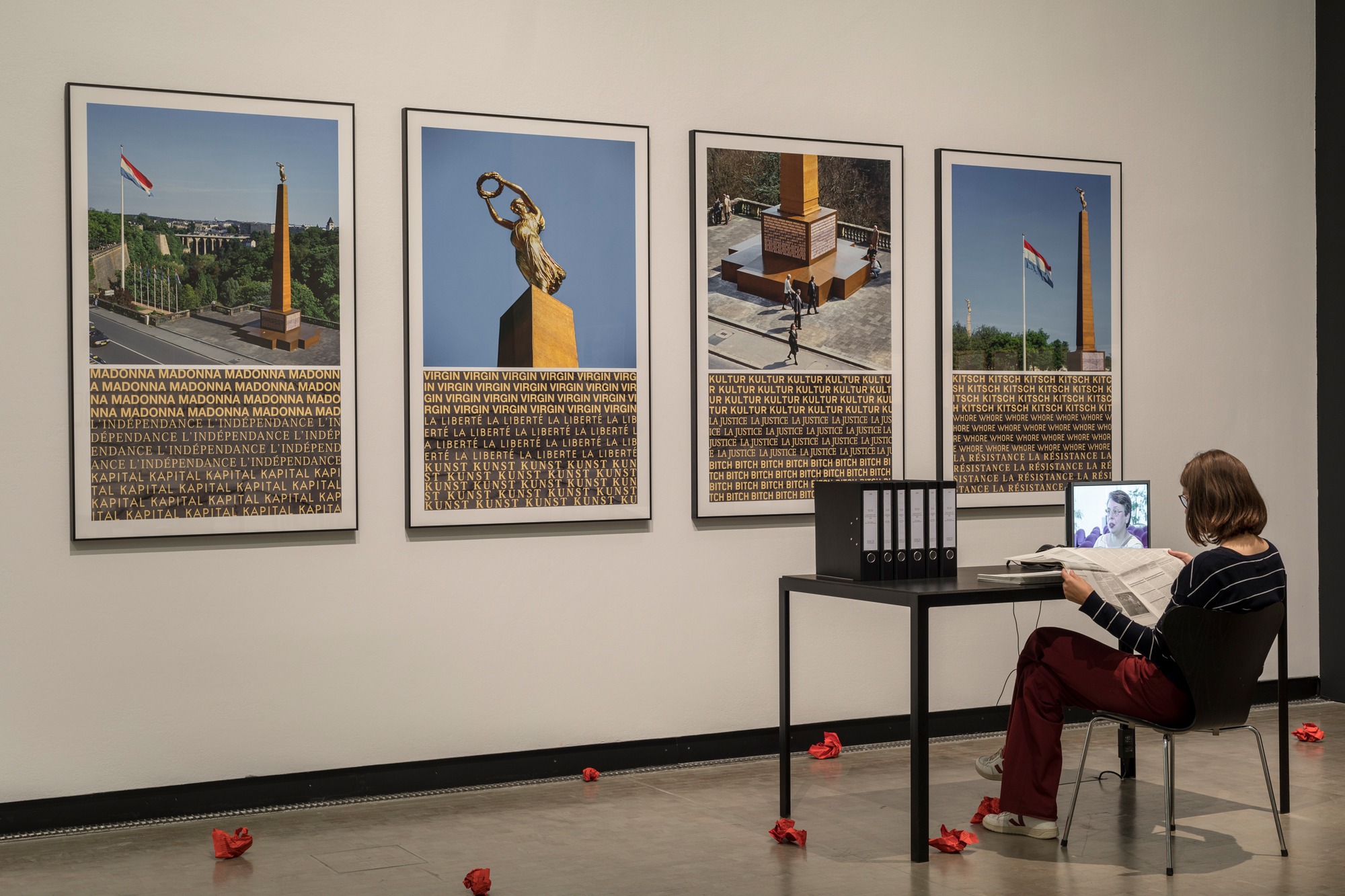 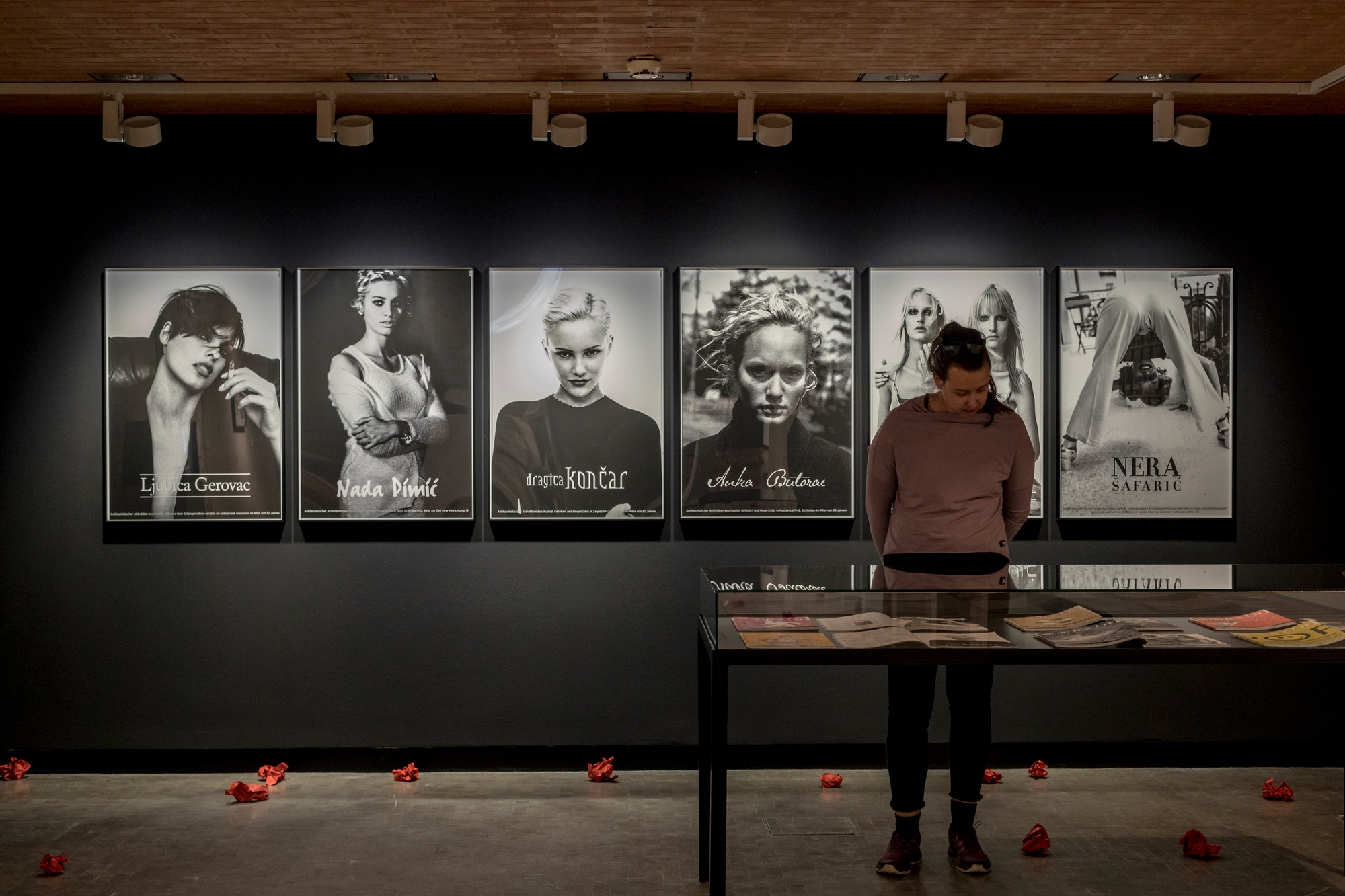 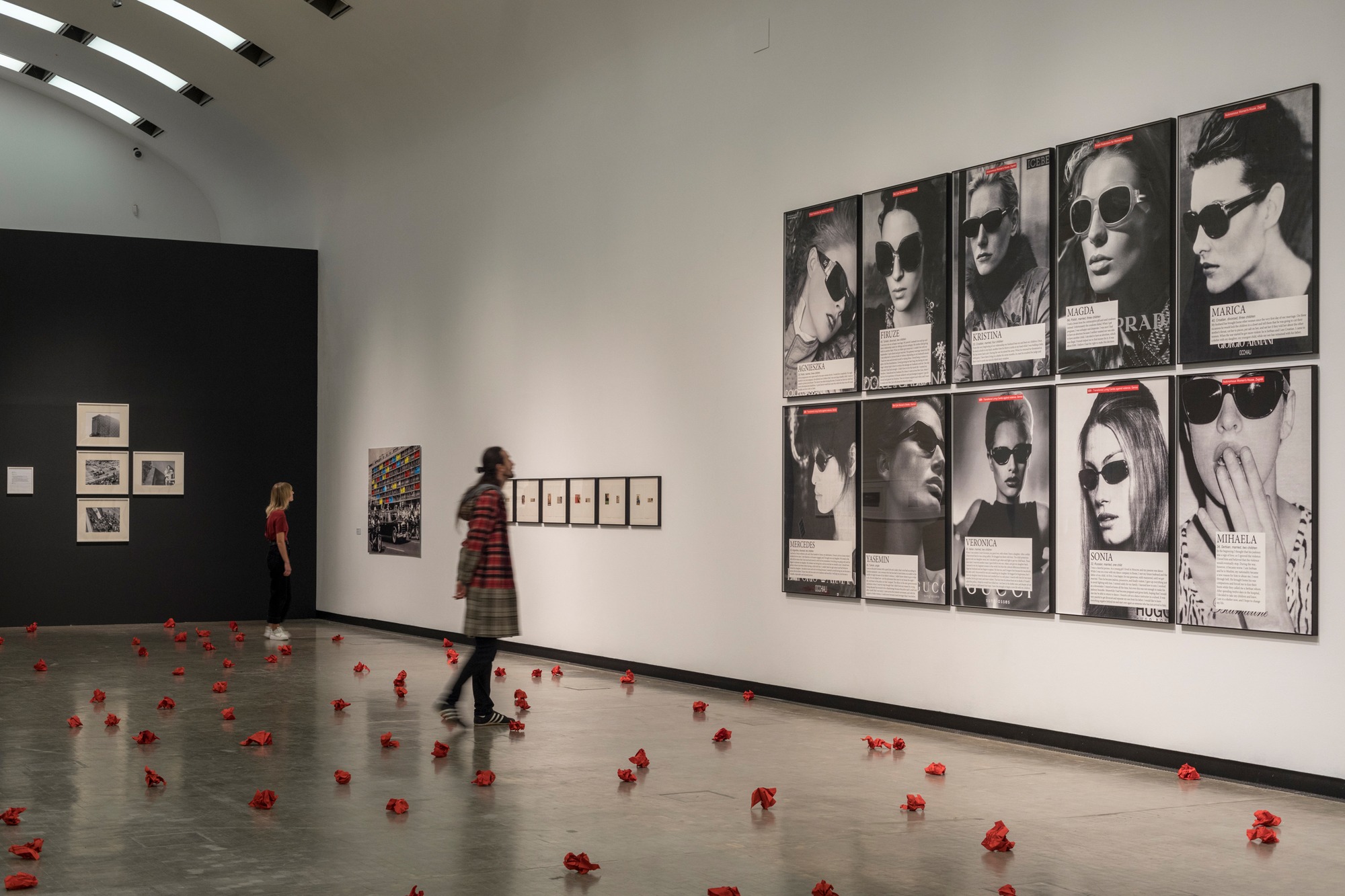 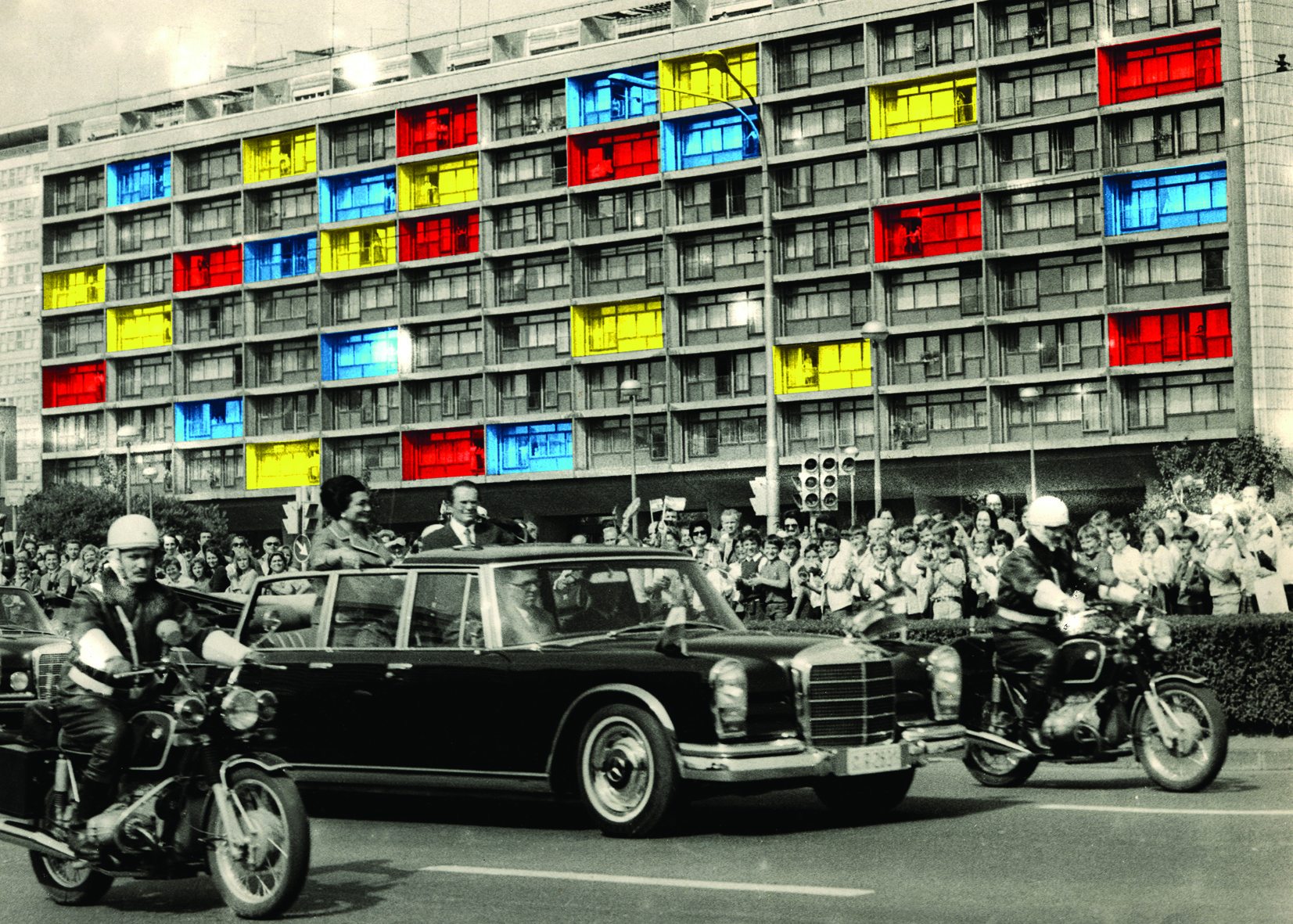 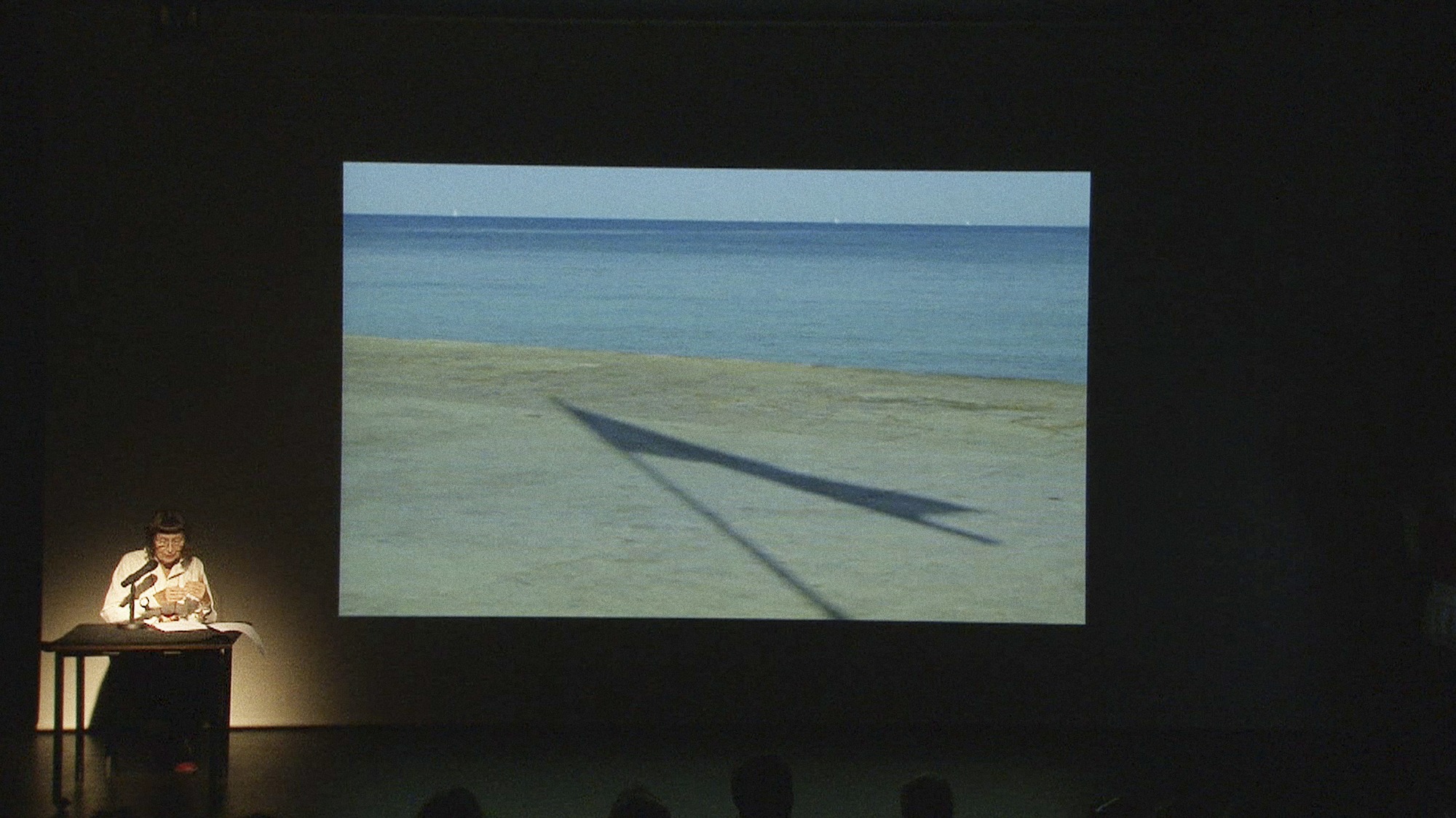 Sanja Iveković, Pourquoi un(e) artiste ne peut pas représenter un État-nation [Why an Artist Cannot Represent a Nation-State], 2012, video still with Rada Iveković, photo: Marko Ercegović, courtesy the artist
Since the 1970s, Sanja Iveković’s artistic practice has taken a clear feminist and activist position and has continuously confronted issues of gender and politics—a practice driven by the desire for the transformation of current social and political relations. Iveković appropriates mass media and commercial advertisement strategies, subverts their messages, and exposes their manipulation mechanisms, thus drawing attention to the capacity of images to influence and transform the way we see things. Through this uncompromising manner of bringing together aesthetic and political investigations, she has influenced generations of artists and curators.

Kunsthalle Wien is proud to present "Works of Heart (1974–2022)", an exhibition that brings together works spanning the whole of Iveković’s prolific career: from early feminist pieces that focused on the relationship between mass media and ideology, created as part of the Nova umjetnička praksa [New Art Practice] movement in Yugoslavia, to her later projects that examined the transformation of Balkan countries from socialist to capitalist political systems, as well as ongoing projects such as "Ženska kuća" [Women’s House], which engages with a wide variety of issues related to violence against women, including the sex industry in Bangkok, honor killings in Turkey, and the impact of war in the former Yugoslavia.

Iveković’s works often start from very personal settings and life circumstances, which are juxtaposed with official histories and mainstream depictions in order to explore representations of female identity, female history, violence against women, state oppression, and manifestations of ideology through mainstream media. While covering the wide range of subjects addressed by the artist’s practice, "Works of Heart (1974–2022)" looks into neglected histories of antifascism and socialism through the prism of her personal history, and it addresses one of the key concerns of her work—the relationship of history to contemporaneity. With her works, Iveković builds different narratives, the narratives of those who were expelled from history: anti-fascist heroines, refugees, Romani and Sinti. For example, her iconic work "Gen XX (1997–2001)" appropriates the presentation of famous fashion models in the media to spread knowledge about women who fought against fascism in Yugoslavia in World War II.

But her works also try to return the forgotten and repressed to collective memory, and Iveković works similarly with her own personal memory: "Works of Heart (1974–2022)" is also about “me and my mother”. The mother-daughter relationship is one of the central issues in the exhibition, but this personal dimension of her retrospective can also be misleading, as this “me” is constantly placed in the context of modern media and is thus cynical about the very existence of an authentic self. In the performance that the artist prepared for this exhibition in collaboration with dancer and choreographer Mitja Obed, she stages a dance that deconstructs stereotypical ideas about the mother-daughter relationship but also about performance as a medium.

An important part of this project is the book of poems by her mother Nera Šafarić-Iveković, who is also one of the heroines of "Gen XX" and who was arrested as a young communist in 1942 and taken to Auschwitz. The title of one of her poems is "Jao si ga onome tko se boji duhova" [Woe betide anyone who is afraid of ghosts], which could be associated in the context of this exhibition with loss, disappearance, and unrepresented, erased histories. The poems are compiled in the artist’s book with the same title "Weh dem, der sich vor Geistern fürchtet" [Woe Betide Anyone Who Is Afraid of Ghosts] that is published on the occasion of the exhibition.

"Works of Heart (1974–2022)" is retrospective in nature, but, at the same time, Iveković works here and now, just as throughout her career she has been an active protagonist in the unfolding of history. Her works are a chronicle of the last two decades of the former Yugoslavia, followed by Yugoslav wars and the transition from socialism to wild capitalism in Eastern Europe, largely won by mobilizing national sentiments and traditional values. Her recent works, however, take a critical and engaged position on the current state of Europe. Iveković’s art wants to leave traces in reality; it has a performative power that strives for gender equality, antifascism, emancipation of collective memory, and solidarity.

From the very beginning, Iveković’s art has revealed how different forms of propaganda work, while she herself has become an activist artist who is able to use the power of art for emancipatory purposes. The activist side of her artistic production is characterized by the direct exchange of experiences and mutual learning, so many of her works do not have a singular and defined form— instead, she applies various strategies of display and presentation depending on the geopolitical context of a particular location, and the works are often dispersed in different media. What defines them is not their final form of presentation, but that they carefully built through collaboration and exchange of resistance strategies with feminist and activist organizations, many of which Iveković either formed or has actively taken part in over the years.

In the context of "Works of Heart (1974–2022)" a part of the "Ženska kuća (Sunčane naočale)" [Women’s House (Sunglasses)] series will be shown in a public space on Yppenplatz in collaboration with Brunnenpassage, while a new version of "Shadow Report" has been produced in collaboration with a member of the GBV-MIG Project on violence against women migrants and refugees, Sieglinde Rosenberger. At Kunsthalle Wien’s shop, Iveković presents publications and postcards created in the context of her previous exhibitions. The proceeds from these sales will be donated to Verein Autonome Österreichische Frauenhäuser [Autonomous Austrian Women’s Shelters Association] (www.aoef.at).

Through her activism, two principles of Iveković’s work become increasingly evident: the deconstructive, which unmasks how oppressive propaganda and its mechanisms of manipulation work and what interests stand behind it; and the constructive, which empowers women, who thus become the subject of their own lives. Her art becomes a safe territory where survivors of violence dare to tell the truth without fear. Emancipatory propaganda is present in both of her two modes of working: one intended for the broad audiences and often made for public space; the other, in direct work with women and their organizations, which function as intimate propaganda. And in many of her works, these two methods are intertwined within the same project.

Detailed information on the works within the exhibition, a complete list of works as well as an introduction by curator Zdenka Badovinac can be found in the comprehensive exhibition guide.

Sanja Iveković was born in Zagreb, Croatia, where she currently lives and works. She was raised in the Socialist Federal Republic of Yugoslavia and belongs to the artistic generation covered by the umbrella term Nova umjetnička praksa [New Art Practice] that emerged after 1968. Iveković was the first female artist in Socialist Yugoslavia and one of a few in so-called Eastern Europe at that time to assume a strong feminist stance, an aspect that remains prominent in her practice today. She has participated in numerous international biennials and major exhibitions.

In her artistic practice, she explores and probes sociopolitical themes, focusing on strategies and methods of resistance to the ruling relations of power, while the main characteristic of her work is to speak from the position of the female subject. In addition to her artistic activity, Iveković is engaged in women’s activism and is the founder and member of several Croatian women’s NGOs.