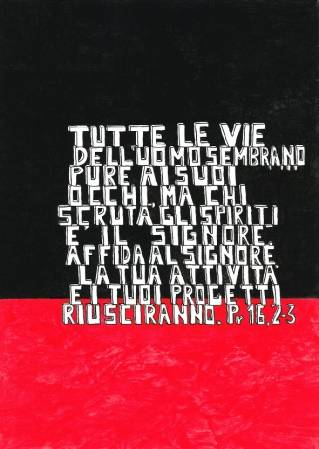 The show keeps together works from different artists.
On the terrasse of the gallery a musician will play a jam session of liscio music, randomly.
The opening is at 4pm.
The time, the place, an italian summer day in a metaphisical afternoon.
There’s no theme on the show, except for a certain approach to the human condition and a quite intense emotive side.
The relation between the works and the music coming (incostantly) from the balcony will result as something not unforeseeable and this actually would be part of the concept behind the exhibition.
Lucile Desamory: born in 1977 in Bruxelles, lives and works in Berlin.
Desamory creates an audiovisual world mixing paper collages, stop motion and musical films. Working with found material such as stock sport photography and encyclopaedic illustration Desamory produces rich and dreamlike pictures, that formally bring together the attitude of stop motion and visual art, the aesthetics of picture-books and galanty shows.
Aneta Grzeszykowska: born in 1974, lives and works in Warsaw.
The work exhibited is part of a series of photographical portraits, whose characters don’t exist: through perfect digital processing all physiognomies were fabricated by the artist and do not have their counterparts in the real life. Surprisingly, real emotions come into play between the people from the photographs and the viewer. Feelings of sympathy or strangeness, a desire to know more about someone who doesn't actually exist or even attempts to fill their empty biographies with some fictional content.
Alberto Guidato: born in Ivrea (To) in 1972, lives and works in Milano.
Using different medias Guidato reflects on subjects that move from the individual to the public dimension.
The work exhibited is born from a prayer. Even the prayer contributes to define the spiritual essence of the symbiotic relationship with the Word.
A mental architecture as an edyfing source and a social mirror.
Victor Man: born in Transylvania, Romania, in 1974. Lives and works in Cluj-Napoca, Romania.
The work Starless Moonless Heaven translates a romantic view of nature, where the only presence (ghostly like) is a black flag, that suggests the memory of something we strongly feel and yet can't penetrate.
Duncan Marquiss: born in 1979, lives and works in Glasgow.
Duncan Marquiss’ s work is interested in the Gothic, from its origin in myth and paganism to its representation in the architecture and sculpture of the middle ages, the notion of the sublime in nature and also in 19th century interpretations Ruskin’s writings.
Pietro Roccasalva: born in Modica in 1970, lives and works in Milano.
Pietro roccasalva’s work is a continuous process, a “situazione d’opera”, that combines installation, sculpture, video and digital images, all of them analysed, documented and able to produce new “situazioni d’opera”, necessarly pictorial.
In the photo exhibited the “dead bread” is at the same time a symbol of death and a nutriment source, as well as the pictorial act.
Dirk Stewen: born in 1972 in Dortmund.
Stewen uses the exploration of the photographic process as a catalyst within his art making practice. His efforts to disrupt, slow down, or recreate photographic production result in compelling formal compositions and juxtapositions that connect images and forms into constellations of ideas and suggested narratives.