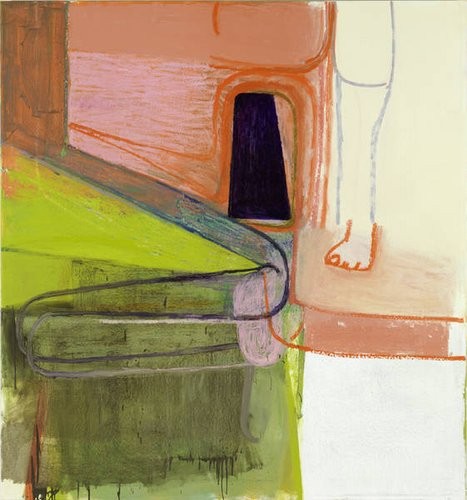 We are happy to open the second solo exhibition of New York based painter Amy Sillman at carlier | gebauer on the 1st of May 2009, on the occasion of the Berlin Gallery-Weekend. In her show „zum Gegenstand“, Sillman will present a range of new paintings, a series of ink portraits, as well as new color drawings. In ‚zum Gegenstand’ Sillman presents an artistic production that is comprised of a sequence of distinct but intrinsically interwoven forms, from large oil paintings to small diagrammatic drawings. With „zum Gegenstand“ Sillman will also produce a fanzine, a small format Xerox publication, which will be on offer at carlier | gebauer. This zine expands the strategy of an interwoven introduction and does not only contain an essay by Sillman, but also exemplary snippets of material and notations, of visual, textual and diagrammatic references of her productions.
carlier | gebauer’s first solo show with Amy Sillman in 2007 concentrated fully on her painting, now, in 2009, this painterly praxis forms the starting point for a more broad view onto her art. In her paintings, Sillman expands colors and lines into forms, which propose a diagrammatic territory of symbols and figures in a psychologically modeled existence. In „zum Gegenstand“ Sillman shows with her paintings drawings of different modes. While some seem to mimic her painterly thoughts in miniature test runs, others are more graphic, sketching figures in tones of grey or even comic, in laying out the seating chart of an imagined art dinner. Sillman’s work is an introduction into a world of part objects, puns and lapses, which make for beautiful and almost clownish canvasses and ambiguous and yet formal drawings, which seem to detect wit in subjects and their formations. Sillman herself describes her approach as „realistic to the world even if it is abstract“. In all of her figurations, Sillman produces drawings and paintings, which deal with negotiations between corporeality and thought. This amounts to an art that is psychologically as well as formally intense, taking up from the memory of Abstract Expressionism but from a female, anxious, anti-heroic and reflexive position.
Painting and drawing in Sillman’s work are media of production for configuring diagrammatic relations. This „diagrammatic (...) does not function to represent, even something real, but rather constructs a real that is yet to come, a new type of reality.“ (Gilles Deleuze) The discrete symbolic order, which Deleuze here encounters in the work of Francis Bacon, also signifies in Amy Sillman’s work. Here again, art no longer figures as a medium of representation, but as a discrete layer of reality, in which figuration, color and form are knitted into logical and yet absurd complexes. In them, the Abstract Expressionism of the 1950s takes on a specific agency, as do others, like „Vesc/Gegenstand“ the magazine that Ilya Ehrenburg and El Lissitzky published together in 1922 or the seating chart of an official dinner at this April’s G20 meeting in London. Sillman’s works present themselves as an ongoing series of working hypothesis of her painting, in which formalism returns humorously.
Amy Sillman lives and works in Brooklyn, New York. She teaches at Bard College and Columbia University and had her first solo show at the Kanoria Centre for Art, Ahmedabad, India, in 1988. In 2008 Amy Sillman’s works have been shown, amongst other places, in a solo exhibition at the Hirshhorn Museum in Washington DC, at the Hammer Museum in Los Angeles, and at the New Orleans Biennale.
www.carliergebauer.com