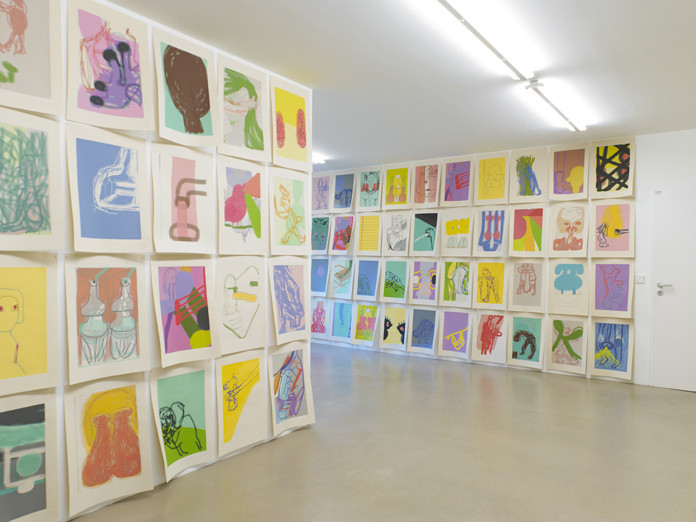 Gisela Capitain and Friedrich Petzel are pleased to announce the first solo exhibition by Amy Sillman at Capitain Petzel. Amy Sillman‘s newest work includes high and low, fast and slow, large and small, and ranges across mediums, from large-scale oil paintings to a 7-minute digital animation and several hundred inkjet prints made from stills of the animation.

Sillman foregrounds the materiality of painting and its formal, psychological, and conceptual dimensions. She constructs her work in a physical way — through gesture, color, and drawing-based procedures — imbuing it with questions of feminism, performativity, and humor. In this show, as always, she is intensively engaged with drawing and its corporeality: drawings that she makes with her little finger on an iPhone screen, and the drawing process inherent to large-scale paintings which she makes using brushes, rags, scrapers and giant oil crayons. Her work is an ongoing negotiation between the improvisatory and the structural aspects of thinking itself, with painting posited as a language in which to express thinking in a formal and affective way. Over the past few years, Sillman has also been staging painting shows that include their own comical forms of questions to painting itself. She has hung paintings alongside their own friendly, democratic forms of accompaniment, such as ‘zines, CDs, and posters.
For this new solo show at Capitain Petzel, she proposes the most everyday form of digital technology -- the iPhone - as the tool for the comic foil that accompanies her new oil paintings. Her digital animated drawing, „Pinky‘s Rule“ plays continuously alongside the paintings. While it loops, its images continually transform and mutate, and it sheds light on the procedures of the paintings. In Sillman‘s hands, large oil paintings can be seen as points in a series of continually transforming moments that continue to roll on, rather than heroic endpoints. In this way, Sillman provides her own comical question to the dialectic of painting itself.

Sillman‘s bibliography includes Amy Sillman: Works on Paper (Gregory R. Miller, 2006), a monograph of her drawings with text by Wayne Koestenbaum, and Between Artists: Gregg Bordowitz and Amy Sillman (ART Press, NY, 2009.) Sillman earned her BFA from the School of Visual Arts in New York and her MFA from Bard College in 1995.
She has received numerous awards and grants, including a Guggenheim Fellowship, the Louise Comfort Tiffany Foundation Award, the Guna S. Mundheim Fellowship at the American Academy in Berlin in 2009. Her work has been widely exhibited and collected in public and private collections, including The Museum of Modern Art in New York, The Art Institute of Chicago, the Metropolitan Museum of Art, the San Francisco Museum of Modern Art, and the Whitney Museum of American Art. A survey of her work will be exhibited in 2013 at the Institute of Contemporary Art in Boston, which will be accompanied by a book.
www.capitainpetzel.de