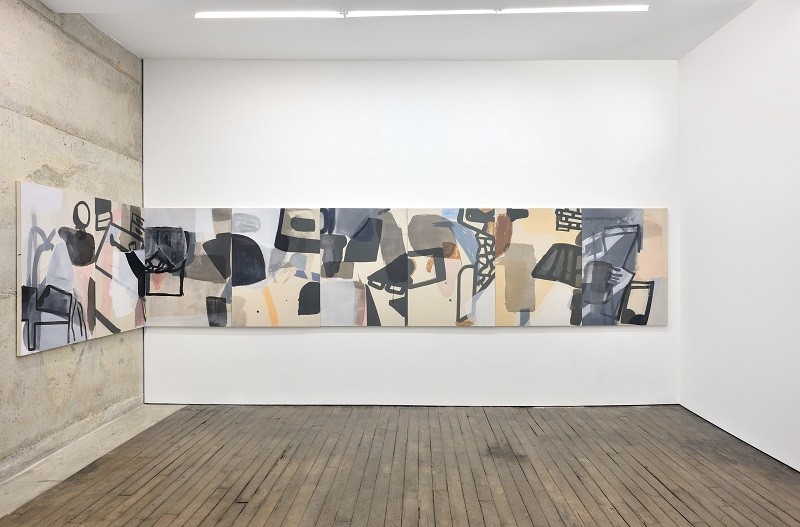 Campoli Presti is pleased to present the 14th part of its ongoing exhibition A Moveable Feast with a presentation of new works and a wall drawing by Amy Sillman.

The pieces in the exhibition unfold as a test strip in which a non-linear sequence of events, forms, possibilities, options, transparencies, re-workings and rubbings is revealed in a continuum of images.

A selection of drawings made by hand, with paper and chalk, are first photographed, then ink-jet printed on canvas and later painted or drawn on top of with ink and gouache. The logic of collage is thus continued in a series of actions that combine one layer with another. This continues Sillman's interest in open-ended procedures in which the material contradicts itself or reveals new properties in an ongoing course of interventions.

Presented as a sequence, the works allow the viewer the ability to see them as a comic strip, or test trip of things-before-the-things, ideas, plans, or preliminary studies. They are made with simple water-based materials or inks, which evoke their materiality as notebook pages while having a tactile, painterly surface.

Being both influenced by her interest in avant-garde animation, particularly Robert Breer's films which propose a comic, manic type of non-narrative structure, as well as her use of ipad/iphone apps to produce her own animated drawings, the canvases focus on the elasticity of images and their ability to shift from sculpture, drawing, and painting to digital traces. On the opposite wall of the canvases, a charcoal drawing proposes a reading key to the works with language cribbed from Freud's 1920's paper “Beyond the pleasure principle”, complicating the relationship between object, subject, and the abject.

Amy Sillman recently had a solo survey exhibition at the ICA Boston, travelling to the Aspen Art Museum and CCS Bard Hessel Museum of Art with an accompanying monograph. Past solo exhibitions were held at Hirshhorn Museum and Sculpture Garden, Washington, DC; at the Tang Museum, at Skidmore College, Saratoga Springs, New York; and at the Blaffer Gallery, University of Houston Art Museum, Houston, TX. Her work has been widely exhibited and is included in numerous public collections, including The Museum of Modern Art in New York; The Art Institute of Chicago; the Metropolitan Museum of Art; the San Francisco Museum of Modern Art, and the Whitney Museum of American Art.
www.campolipresti.com