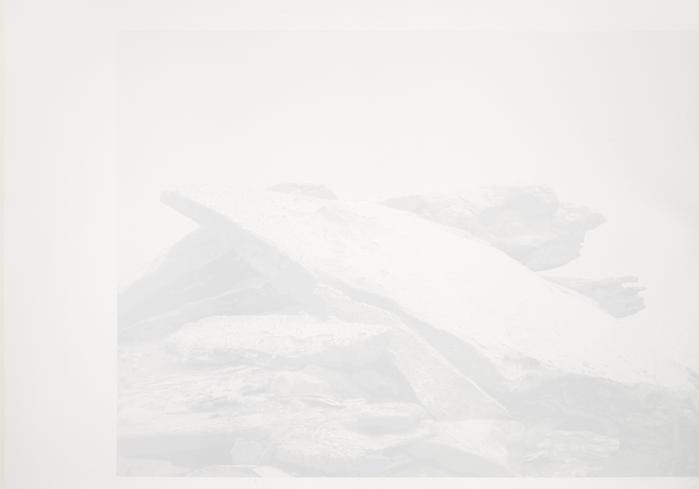 Greenberg Van Doren Gallery is pleased to present Bracket, a solo exhibition of new paintings by the Brooklyn-based artist Cameron Martin. The exhibition will be on view from February 23rd to April 23rd, 2011. A fully illustrated catalogue featuring a conversation between Cameron Martin and Amy Sillman has been published on the occasion of the exhibition.

The exhibition marks an exciting moment in Martin's ongoing investigation of image production as it relates to landscape. As the title suggests, in his new work Martin engages multiple meanings of the term bracketing, by leaving sections of pale-toned space that frame the image inside the canvas, employing multiple exposures in certain repeated images, and promoting the implication of information that has been excluded from the pictures due to their cropping. In this new group of paintings on canvas and paper, he works at collapsing the interrelationship between painting, photography, and digital media. As discussed by Martin and Sillman:

Amy: []...you are locating the image through a negation. So you have staked out a kind of non-place, but then you keep on rendering the world, showing how it is presented...even while you seem to go to pains to conceal the means of production of the pictures. It is almost impossible to know whether they are paintings or screen prints, or printed prints, or prints with paintings over them.
Cameron: And the place that is represented is sort of slipping away. It is either coming or fading, it is not clear.

Environmental discourse emerges from these eerily pristine glimpses of nature, which the artist drains of natural pigmentation, thereby making the imagery difficult to locate historically. By intricately layering tones of white and gray onto the canvas, Martin creates illusory effects in which monochromatic surfaces appear as overexposed photographs or de-saturated digital prints. Their palette demands time from the viewer's eye, and through serialized presentation of not-quite-concrete forms, Martin's paintings implicate the seemingly moribund landscape genre in picturing our frustrated desire to connect with the natural world.

Cameron Martin was born in Seattle, Washington in 1970 and lives and works in Brooklyn, New York. He was educated at Brown University and the Whitney Independent Study Program. He is the recipient of a 2010 John Simon Guggenheim Memorial Foundation Fellowship and a 2008 Joan Mitchell Foundation Fellowship. Solo exhibitions include "Eclipse" Greenberg Van Doren Gallery and Eleven Rivington, NY (2007), "Focus 3" Philbrook Museum of Art, Tulsa, OK (2006), and "Currents 97" St. Louis Museum of Art, St. Louis, MO (2006). Martin was included in the prestigious Whitney Biennial in 2004. His works are included in the collections of the Albright-Knox Art Gallery, the Seattle Art Museum and the Whitney Museum of Art, among others.
www.vandorenwaxter.com